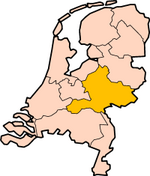 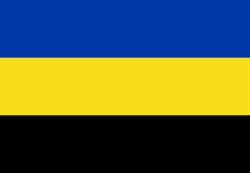 Gelderland is a province in the east of the Netherlands. The capital city is Arnhem, but Nijmegen and Apeldoorn are bigger. Other important cities are Zutphen, Doetinchem, Harderwijk and Tiel.

It is surrounded by the provinces of Limburg, North Brabant, South Holland, Utrecht, Flevoland and Overijssel and the German federal state North Rhine-Westphalia.

The most important rivers are the Rhine (Rijn), the Waal, the IJssel and the Maas (border with North Brabant). The border with Flevoland is formed by the so-called randmeer ("border lake") of the Flevopolder.

Cota of Arms of Guelders

In the 11th century, Guelders was a county. It was called Gelre in Dutch and Geldern in German. In 1339, it became a duchy. At first, it existed of the surroundings of the city of Geldern (now in Germany). By the end of the 14th century, it included most of the modern province of Gelderland and parts of the province of Limburg and of the German District of Cleves. It became part of the Habsburg Netherlands in 1543, one of the Seventeen Provinces.

All content from Kiddle encyclopedia articles (including the article images and facts) can be freely used under Attribution-ShareAlike license, unless stated otherwise. Cite this article:
Gelderland Facts for Kids. Kiddle Encyclopedia.