View to the town from the railway bridge 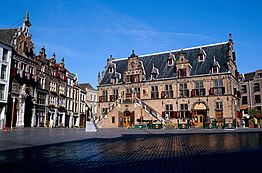 Nijmegen Nijmeegs: Nimwegen is a city in the Dutch province of Gelderland, on the Waal river close to the German border.

Nijmegen is the oldest city in the Netherlands, the first to be recognized as such in Roman times, and in 2005 celebrated 2,000 years of existence.

The municipality is part of the Arnhem-Nijmegen urban region, a metropolitan area with 736,107 inhabitants in 2011.

All content from Kiddle encyclopedia articles (including the article images and facts) can be freely used under Attribution-ShareAlike license, unless stated otherwise. Cite this article:
Nijmegen Facts for Kids. Kiddle Encyclopedia.