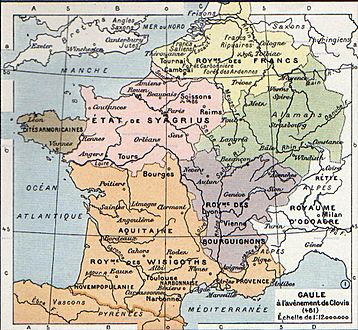 Gaul, or the Frankish Empire, Founded in 481 AD, by Clovis l.

Francia was a kingdom founded in 481 AD. It may also be called the Kingdom of the Franks, Frankish Kingdom, or Frankish Empire. It was first a province of the Western Roman Empire founded by Clovis I. Before that it was a Germanic state. After the Treaty of Verdun in 843, West Francia became the predecessor of France, and East Francia became that of Germany.

All content from Kiddle encyclopedia articles (including the article images and facts) can be freely used under Attribution-ShareAlike license, unless stated otherwise. Cite this article:
Francia Facts for Kids. Kiddle Encyclopedia.