Charles the Bald facts for kids 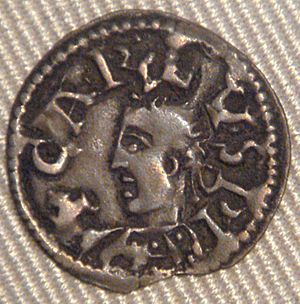 Charles married Ermentrude, daughter of Odo I, Count of Orléans, in 842. She died in 869. In 870, Charles married Richilde of Provence, who was descended from a noble family of Lorraine.

All content from Kiddle encyclopedia articles (including the article images and facts) can be freely used under Attribution-ShareAlike license, unless stated otherwise. Cite this article:
Charles the Bald Facts for Kids. Kiddle Encyclopedia.