The four departments in the region were Côte-d'Or, Nièvre, Saône-et-Loire and Yonne. Its capital was Dijon.

Burgundy was named for the Germanic Burgundian tribe who moved there from an island in the Baltic Sea. They moved when the Roman Empire fell apart to set up a kingdom with its own laws. This included part of what is now Switzerland.

During the Middle Ages, Burgundy was ruled by dukes. In the 15th century it was very powerful. The dukes ruled lands as far north as the Netherlands. After Duke Charles the Bold died when he wanted to conquer the city of Nancy in 1477, France took southern Burgundy. It was a province until 1790. The House of Habsburg got the northern part, which later became the Southern Netherlands. 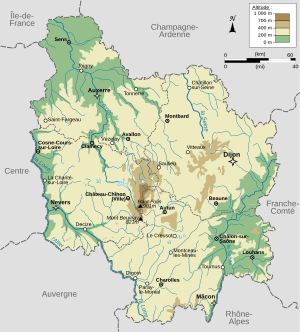 The Burgundy region is one of the largest regions of Metropolitan France. It has an area of 31,582 km2 (12,194 sq mi). It bordered with five other regions: Champagne-Ardenne to the north, Franche-Comté to the east, Rhône-Alpes to the southeast, Auvergne to the southwest, Centre-Val de Loire to the west and Île-de-France to the north.

Most of the territory of Burgundy is occupied by a plateau of low hills (the Burgundy Hills) surrounded by valleys of the main rivers. The valley of the Yonne river and its tributaries is to the north of the region. To the southeast is the valley of the Saône river.

The main rivers of the region are Yonne, Armançon, Loire, Seine and Saône.

The climate of Burgundy is an oceanic climate with temperate summers, "Cfb" (Marine West Coast Climate) in the Köppen climate classification.

The Burgundy region is formed by four departments: 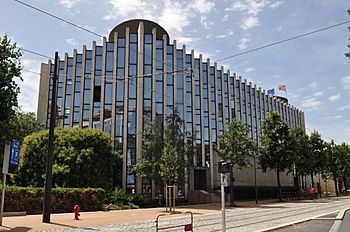 Seat of the regional council of Burgundy in Dijon.

The ten main cities in the region are:

The region is known for its wines, both red and white. Many well-known wines, such as Macon and Beaujolais, were first made here. A few wines are also the 'Arbois'-type. Arbois wines are between red and white and almost yellow in colour.

All content from Kiddle encyclopedia articles (including the article images and facts) can be freely used under Attribution-ShareAlike license, unless stated otherwise. Cite this article:
Burgundy Facts for Kids. Kiddle Encyclopedia.