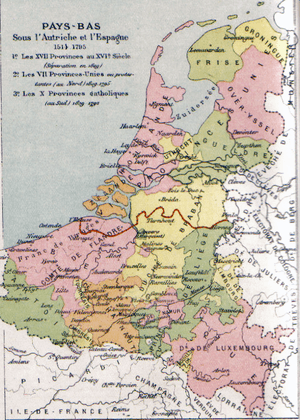 The Southern Netherlands, also called the Catholic Netherlands, were part of the Low Countries. They were controlled by Spain (1556–1714), Austria (1714–94) and added into France (1794–1815). This area was most of modern Belgium, the Imperial Abbey of Stavelot-Malmedy, the County of Bouillon and Luxembourg, and in addition some parts of the Netherlands, as well as, until 1678, most of the present Nord-Pas-de-Calais region in northern France. The Southern Netherlands were part of the Holy Roman Empire until it was added to France.

The northern seven provinces, led by Holland and Zeeland, started their independence as the United Provinces after 1581. The southern Netherlands were reconquered by the Spanish general Alexander Farnese, Duke of Parma. The Southern Netherlands passed to the Austrian Habsburgs after the War of the Spanish Succession in the early 18th century. After the French Revolutionary Wars they were joined with the northern Netherlands. They were made a single kingdom under the House of Orange at the 1815 Congress of Vienna. The south-eastern third of Luxembourg Province was made into Luxembourg. In 1830 the mostly Roman Catholic southern half became independent as the Kingdom of Belgium.

All content from Kiddle encyclopedia articles (including the article images and facts) can be freely used under Attribution-ShareAlike license, unless stated otherwise. Cite this article:
Southern Netherlands Facts for Kids. Kiddle Encyclopedia.