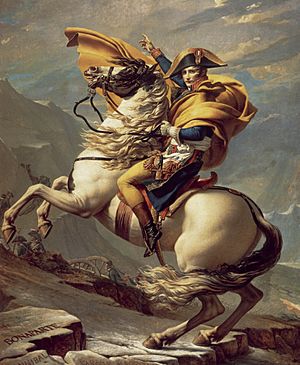 Napoleon Crossing the Alps by Jacques-Louis David. In one of the famous paintings of Napoleon, the Consul and his army are depicted crossing the Swiss Alps on their way to Italy. The daring maneuver surprised the Austrians and forced a decisive engagement at Marengo in June 1800. Victory there allowed Napoleon to strengthen his political position back in France.

The French Revolutionary Wars consisted of conflicts between 1792 and 1802; there was fighting between French Revolutionary government and several European states. Characterized by French Revolutionary fervour and military innovations, campaigns saw French Revolutionary Armies take out a number of opposing coalitions and expand French control into the Low Countries, Italy and the Rhineland. These wars involved huge numbers of soldiers owing into applications of modern mass conscription. The wars are divided between First Coalition (1792 to 1797) and the Second (1798 to 1801), although France was under war with Great Britain constantly from 1793 until 1802. Hostilities ceased with Treaty of Amiens 1802, though conflicts soon flared up again with the Napoleonic War.

All content from Kiddle encyclopedia articles (including the article images and facts) can be freely used under Attribution-ShareAlike license, unless stated otherwise. Cite this article:
French Revolutionary Wars Facts for Kids. Kiddle Encyclopedia.