Battle of the Nile facts for kids 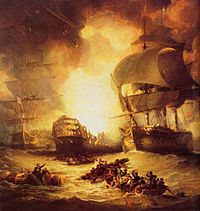 A painting showing the wreck of a French ship, L'Orient, during the battle.

The Battle of the Nile was an important naval battle (fought by ships) between the British and the French. It happened in 1 to 3 August, 1798. The British Royal Navy, led by Horatio Nelson, defeated the French who were led by Napoleon Bonaparte. It is called the Battle of the Nile because it was fought in an estuary of the River Nile, off the coast of Egypt. Britain took control of the eastern Mediterranean. Napoleon had won the earlier Battle of the Pyramids, but now his army was cut off from France. They eventually surrendered at the Capitulation of Alexandria.

All content from Kiddle encyclopedia articles (including the article images and facts) can be freely used under Attribution-ShareAlike license, unless stated otherwise. Cite this article:
Battle of the Nile Facts for Kids. Kiddle Encyclopedia.