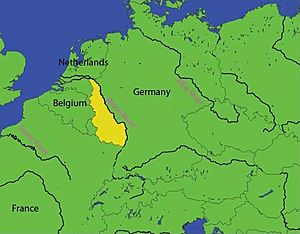 The Rhinelands used to mean an area on both banks of the Rhine, in Central Europe, but the Rhineland (or Rheinland in German) is now a general word for areas of Germany along the middle and the lower Rhine. It borders Luxembourg, Belgium and the Netherlands to the west and the Rhine to the east.

After the French were defeated in the early 19th century, the German - and the Dutch-speaking areas in the middle and the lower Rhine were added to the Kingdom of Prussia and were called the Rhine Province (or Rhenish Prussia).

After World War I, the western part of Rhineland was under Allied control and demilitarized, with no military activities allowed, under the Treaty of Versailles. German forces sent armies back to it in 1936, three years before World War II began.

All content from Kiddle encyclopedia articles (including the article images and facts) can be freely used under Attribution-ShareAlike license, unless stated otherwise. Cite this article:
Rhineland Facts for Kids. Kiddle Encyclopedia.