Luxembourg is a country in Western Europe; its official name is the Grand Duchy of Luxembourg (Luxembourgish: Groussherzogtum Lëtzebuerg, French: Grand-Duché de Luxembourg, German: Großherzogtum Luxemburg). It is a small country. It was one of the first countries in the European Union. It is also a member of the Benelux. The countries next to Luxembourg are Belgium, Germany, and France. Its population is 442,972. Which is big for its country's size. 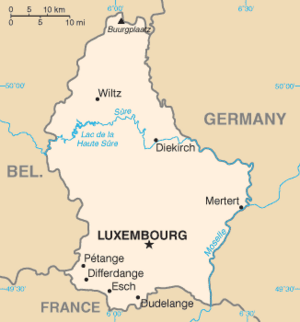 The largest towns are Luxembourg, Esch-sur-Alzette, Dudelange, and Differdange.

To the east, Luxembourg borders the German Bundesländer of Rhineland-Palatinate and Saarland, and to the south, it borders the French région of Lorraine. The Grand Duchy borders the Belgian Walloon Region, in particular the latter's provinces of Luxembourg and Liège, part of which comprises the German-speaking Community of Belgium, to the west and to the north, respectively.

The northern third of the country is known as the 'Oesling', and forms part of the Ardennes. It is dominated by hills and low mountains, including the Kneiff near Wilwerdange, which is the highest point, at 560 metres (1,837 ft). Other mountains are the 'Buurgplaaz' at 559 metres near Huldange and the 'Napoléonsgaard' at 554 metres near Rambrouch. The region is sparsely populated, with only one town (Wiltz) with a population of more than four thousand people. 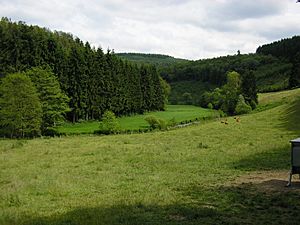 The southern two-thirds of the country is called the "Gutland", and is more densely populated than the Oesling. It is also more diverse and can be divided into five geographic sub-regions. The Luxembourg plateau, in south-central Luxembourg, is a large, flat, sandstone formation, and the site of the city of Luxembourg. Little Switzerland, in the east of Luxembourg, has craggy terrain and thick forests. The Moselle valley is the lowest-lying region, running along the southeastern border. The Red Lands, in the far south and southwest, are Luxembourg's industrial heartland and home to many of Luxembourg's largest towns.

The border between Luxembourg and Germany is formed by three rivers: the Moselle, the Sauer, and the Our. Other major rivers are the Alzette, the Attert, the Clerve, and the Wiltz. The valleys of the mid-Sauer and Attert form the border between the Gutland and the Oesling.

According to the 2012 Environmental Performance Index, Luxembourg is one of the world's best performers in environmental protection, ranking 4th out of 132 assessed countries Luxembourg also ranks 6th among the top ten most livable cities in the world by Mercer's.

Luxembourg has an oceanic climate, marked by high precipitation, particularly in late summer. The summers are warm and winters cool.

Luxembourg is a parliamentary democracy lead by a constitutional monarch. Under the constitution of 1868, executive power is in the hands of the Governor and the cabinet, which consists of several other ministers.

All content from Kiddle encyclopedia articles (including the article images and facts) can be freely used under Attribution-ShareAlike license, unless stated otherwise. Cite this article:
Luxembourg Facts for Kids. Kiddle Encyclopedia.