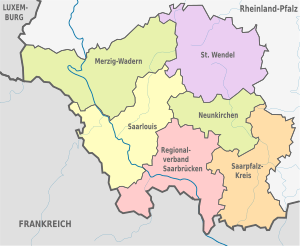 In 1920, the Treaty of Versailles made Saarland from parts of the Prussian Rhine Province (1,465 km2 (565.6 sq mi)) and the Rhine Palatinate (416 km2 (160.6 sq mi)). The area was put under the control of the League of Nations for 15 years. After a plebiscite (vote) in 1935, Germany got the land back. After World War II the Saarland came under French administration. The Saar Protectorate was allowed its own government for most things in 1947 but not independence. Germany got the Saarland back in 1957 and it became a Bundesland.

In the south is France, in the north-west Luxembourg and in the north and east is Rhineland-Palatinate.

Saarland is divided in 6 districts:

All content from Kiddle encyclopedia articles (including the article images and facts) can be freely used under Attribution-ShareAlike license, unless stated otherwise. Cite this article:
Saarland Facts for Kids. Kiddle Encyclopedia.