The Territory of the Saar Basin was usually called the Saar or the German: Saargebiet. It was a territory governed by the League of Nations under the Treaty of Versailles for 15 years from 1920.

It was made up of parts of the Prussian Rhine Province and the Bavarian Palatinate of the Rhine. It was slightly smaller than the modern German state of Saarland.

According to Treaty of Versailles the highly industrialized Saarland was to be governed by the League of Nations for a period of 15 years, and its coalfields given to France. The Commission of Government, which represented the League of Nations, had five members. At least one member had to be French and one a native of the Saar.

At the end of the 15 year period, in 1935, the people of the Saar voted on how they wanted their country. They voted to become a part of Nazi Germany.

It had a currency, the Saar franc, and its own postage stamps during this period.

Chairmen of the Commission

The League of Nations' control to the region was represented by the following Chairmen of the Commission of Government:

In 1933, a lot of anti-Nazi Germans fled to the Saar, as it was the only part of Germany left outside the Third Reich's control. As a result, anti-Nazi groups wanted the Saarland to remain under control of League of Nations as long as Adolf Hitler ruled Germany. However, France had a lot of power in the Saar. France had control of the coalmines and even had the Saar's currency called the franc. Not many Saarlanders liked France, and in the plebiscite on 13 January, 1935, 90% of those voting that wished to join Germany, 8.86% wanted to stay with the League of Nations. Only 0.40% (that is, four voters in every thousand) wanted to join France. 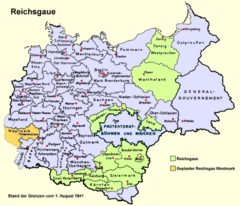 Germany in 1941. The Saar and part of Occupied France was called Westmark. It is shown in a dark yellow tone.

On 17 January 1935, the territory's re-union with Germany was approved by the League Council. On March 1, the Nazi Germany took over the region, and appointed Josef Bürckel as Reichskommissar für die Rückgliederung des Saarlandes, "Reich Commissioner for the re-union of Saarland".

Many former politicians and office holders of the Saargebiet were changed or arrested by the Nazis.

All content from Kiddle encyclopedia articles (including the article images and facts) can be freely used under Attribution-ShareAlike license, unless stated otherwise. Cite this article:
Saargebiet Facts for Kids. Kiddle Encyclopedia.