The Saar (French: Sarre) is a river in northeastern France (Grand Est) and western Germany (Saarland, Rhineland-Palatinate). It is a right tributary of the Moselle River. It rises in the Vosges Mountains in Grand Est and flows northwards into the Moselle near Trier.

The first written mention of the Saar, in Latin language as Saravus, is found in the poem Mosella by the Roman poet Decimus Magnus Ausonius. 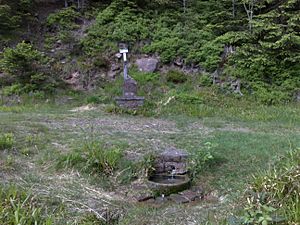 Source of the Red Saar 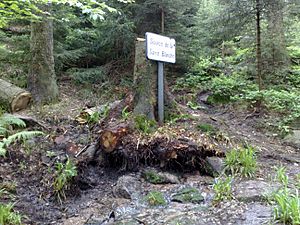 Source of the White Saar

The Saar river is born at the foot of Mont Donon, the highest peak of the northern Vosges Mountains. It flows first for about 126 km (78 mi) through the French region of Grand Est. The Saar marks the border between France and Germany for about 11 km (7 mi) from its confluence with the Blies, between the towns of Sarreguemines and Saarbrücken and goes into German territory.

Then the river flows about 68 km (42 mi) through the Saarland, and about 31 km (19 mi) through the Rhineland-Palatinate and, finally, flows into the Moselle at Konz between Trier and the Luxembourg border.

The Sarre Rouge (Red Saar) and Sarre Blanche (White Saar) are considered as the two source rivers of the Saar.

The Saar river, and its two source rivers, flow first through the Moselle department, in the Lorraine region; then, for a short distance, flow through the Bas-Rhin department, in the Grand Est region. From Sarrealbe to Sarreguemines, the Saar flows along the border with Germany. At Sarreguemines, the Blies river, the largest tributary of the Saar, flows into the Saar and its discharge rises from 20.9 m³/s to 41.5 m³/s.

From Sarreguemines, the Saar is navigable (it is deep, wide and slow enough for a ship to pass). Then the Saar gets into German territory forming a narrow valley through the western Rhenish Massif. At its beginning in this region, it forms the famous Saar loop (German: Saarschleife) at Mettlach.

After 246 km (129 km in France, and 117 km in Germany) the Saar flows into the Moselle river at Konz (Rhineland-Palatinate) between Trier and the Luxembourg border.

Grapes, to produce wine, are grown along the lower Saar, mainly between Serrig and Konz.

Tributaries of the Saar

Some of the important tributaries of the Saar are: 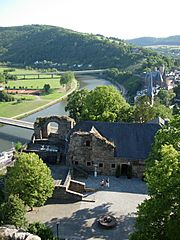 View from Saarburg of the Saar

Some towns and cities found along the river are:

All content from Kiddle encyclopedia articles (including the article images and facts) can be freely used under Attribution-ShareAlike license, unless stated otherwise. Cite this article:
Saar River Facts for Kids. Kiddle Encyclopedia.