Moselle is a département in the east of France. It is named after the Moselle River. 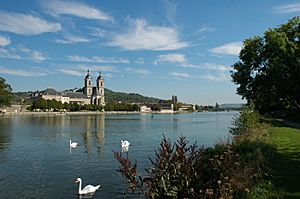 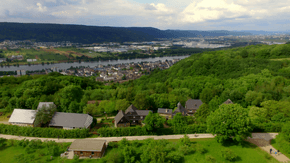 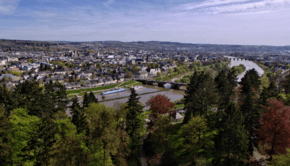 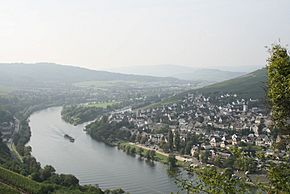 Beilstein on the Moselle 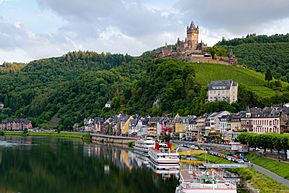 The Moselle is a river flowing through France, Luxembourg, and Germany. It is a left tributary of the Rhine, which it joins at Koblenz. A small part of Belgium is also drained by the Moselle through the Sauer and the Our.

The Moselle "twists and turns its way between Trier and Koblenz along one of Germany's most beautiful river valleys." It flows through a region that has been influenced by mankind since it was first cultivated by the Romans. Today, its hillsides are covered by terraced vineyards where "some of the best Rieslings grow", and numerous ruined castles dominate the hilltops above wine villages and towns that line the riverbanks. Traben-Trarbach with its art nouveau architecture and Bernkastel-Kues with its traditional market square are two of the many popular tourist attractions on the Moselle river.

The name Moselle is derived from the Celtic name form, Moseal, via the Latin Mosella, a diminutive form of Mosa, the Latin description of the Meuse, which used to flow parallel to the Moselle. So the Mosella was the "Little Meuse".

The Moselle is first recorded by Tacitus in Book 13 of his Annals and in Book 4 of his Histories.

The Roman poet, Decimius Magnus Ausonius, made it a literary theme as early as the 4th century. In his poem dated A.D. 371, called Mosella, which was published in 483 hexameters, this poet of the Late Antiquity and teacher at the Trier Imperial Court (Kaiserhof) described a journey from Bingen over the Hunsrück hills to the Moselle and then following its course to Trier on the road named after him, the Via Ausonius. Ausonius describes flourishing and rich landscapes along the river and in the valley of the Moselle, thanks to the policies of their Roman rulers. 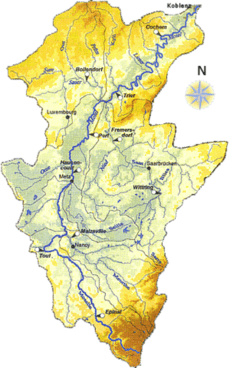 The source of the Moselle is at 715 metres above sea level on the Col de Bussang on the western slopes of the Ballon d'Alsace in the Vosges. After 544 kilometres it discharges into the Rhine at the Deutsches Eck in Koblenz at a height of 59 metres above NHN. The length of the river in France is 314 kilometres, for 39 kilometres it forms the border between Germany and Luxembourg, and 208 kilometres are solely within Germany.

The Moselle flows through the Lorraine region, west of the Vosges. Further downstream, in Germany, the Moselle valley forms the division between the Eifel and Hunsrück mountain regions.

The average flow rate of the Moselle at its mouth is 328 m³/s, making it the second largest tributary of the Rhine by volume after the Aare (560 m³/s) and bigger than the Main and Neckar.

The section of the Moselle from the Franco-German-Luxembourg tripoint to its confluence with the Saar near Konz shortly before Trier is in Germany known (geographically incorrectly) as the Upper Moselle. The section from Trier to Pünderich is the Middle Moselle, the section between Pünderich and its mouth in Koblenz as the Lower Moselle or Terraced Moselle (Terrassenmosel). Characteristic of the Middle and Lower Moselle are its wide meanders cut deeply into the highlands of the Rhenish Massif, the most striking of which is the Cochemer Krampen between Bremm and Cochem. Also typical are its vineyard terraces.

From the tripoint the Moselle marks the entire Saarland-Luxembourg.

The three largest tributaries of the Moselle are, in order, the Meurthe, the Saar and the Sauer. The Meurthe was the old upper course of the Moselle, until the latter captured the former upper reaches of the Meuse and took it over. However, the Meuse only delivered a little more water than the Meurthe at its confluence. The Saar is the biggest of all the tributaries (78.2 m³/s) as well as the longest (246 km). The Sauer is the largest left-hand tributary and drains the region on either side of the German-Luxembourg border. The largest tributary relative to the Moselle at its confluence is the Moselotte, which is about 40% greater by volumetric flow and thus represents the main branch of the Moselle system. At its mouth, the Mosell delivers 328 m³/s of water into the Rhine after flowing for 544 km. 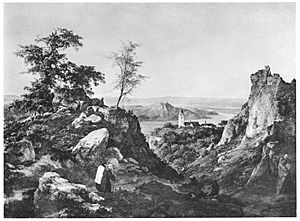 Through the Moselle valley run the Moselle Wine Road and the Moselle Cycleway, which may be cycled from Metz in France via Trier to Koblenz on the River Rhine, a distance of 311 kilometres. Between Koblenz and Trier, large sections run on the trackbed of the old Moselle Valley Railway, far from the noise and fumes of motor vehicles. Every year on the Sunday after Pentecost, the 140 kilometres of road between Schweich and Cochem is also car-free as part of the Happy Moselle Day.

A number of notable castles and ruins adorn the heights above the Moselle valley and many are visible on a boat trip on the Moselle.

In 1910, a hiking trail, the Moselle Ridgeway, was established which runs for 185 kilometres on the Eifel side and 262 kilometres on the Hunsrück side. Another unusual trail runs from Ediger-Eller via the Calmont Trail to Bremm through the steepest vineyard in Europe.

Before the construction of barrages the Moselle was a popular route for ustufen beliebter Wanderfluss für folding kayaks which is why many of the weirs have boat channels. The river is still used today by canoeists, especially during the annual week-long lock closures when no commercial shipping is permitted.

In April 2014 the Moselle Trail was opened, a path running for 365 kilometres from Perl on the Upper Moselle to Koblenz. Numerous Moselle Trail "partner trails", the so-called side branches (Seitensprünge) and "dream paths" (Traumpfade) enhance the hiking network in the Moselle Valley.

At Koblenz Locks the Mosellum offers exhibitions about the migration of fish in the Moselle as well as water ecology, navigation and power generation. With the construction of the visitor and information centre the most modern fish ladder along the Moselle was opened.

A wine-growing region lies along the Moselle with a cultivated area of about 10,540 hectares. The largest part, currently just under 9,000 ha, is on German soil in the states of Rhineland-Palatinate and Saarland; the Luxembourg part has an area of about 1,300 hectares (see Wine in Luxembourg). Upstream on the Moselle the vineyards extend into France as far as Seille in the region of Côtes de Moselle with an area of 130 hectares and to the region around Toul (Côtes de Toul) covering 110 hectares.

The German Moselle wine region, including its tributaries, bears the growing and manufacturing name of "Mosel". For marketing reasons the agricultural authorities of the region have divided it into six wine-growing areas. The wine literature and specialist press, by contrast, divide the region into four areas based on geomorphological, micro-climatic and also historical reasons:

1. Upper Moselle. The valley sides of the Upper Moselle (also called the Burgundy Moselle, Burgundermosel) with their overwhelmingly muschelkalk soils belong geologically to the so-called Paris Basin, which explains its low proportion of Riesling - only around 10% in 2010 - and the increasing cultivation of Pinot Blanc and Pinot Noir grapes.

2. Trier Region. Around the city of Trier and in the valleys of the Saar and Ruwer with their side valleys, the Riesling is the predominant grape on the shale soils, with over 80% of the crop. One climatic feature of this area is the frequent orientation of often small southwest-southeast facing locations in which the vegetation is exposed to stronger, cooler winds and, especially in the light of recent global warming, often achieve lower degrees of maturity than in the narrow, often deeply incised valley of the Middle and Lower Moselle.

3. Middle Moselle. With around 6000 hectares of vineyard the Middle Moselle is the largest wine growing area of the Moselle. According to the wine experts and trade, the "greatest" wines of the Moselle, both in quantity and quality, are grown here on land that has been consolidated into large concerns with much vaunted steeply sloped vineyards.

4. Lower Moselle. In the Lower Moselle Valley, the viticulture is more picturesque: with large numbers of medieval castles, high above little villages, decorated with timber-framed houses, surrounded by steep slopes with small terraces in the narrow, winding valley. Here, cultivating vines is very labour-intensive and costly and it is difficult to make it economical. As a result, it is common for vineyards to fall into ruin here.

The wine industry on the German Moselle has been declining for decades. In 2005, statistics showed there were 10,375 hectares of vineyard; by 2012 this had fallen to just 8,491. The vineyards that have fallen fallow are mostly those on extremely steep hillsides. There has been a major decline in the number of so-called Nebenerwerbswinzer (vintners for whom it is a secondary occupation), and the small, family farming operations that, until the end of the 1960s formed the majority of wine businesses. Comparative figures by the Chamber of Agriculture for Rhineland-Palatinate for several wine villages on the Lower Moselle e. g. show that there were still 797 wine businesses in the early 1960s, but by the early 2000s there were only just under 100.

All content from Kiddle encyclopedia articles (including the article images and facts) can be freely used under Attribution-ShareAlike license, unless stated otherwise. Cite this article:
Moselle Facts for Kids. Kiddle Encyclopedia.