The Sauer (German, Luxembourgish) or Sûre (French) is a river in Belgium, Luxembourg and Germany. It is a left tributary of the river Moselle, and so it is part of the drainage basin of the Rhine river. 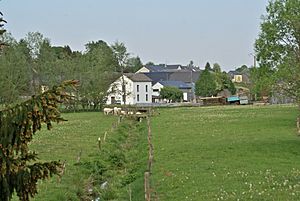 The Sauer near its source in Vaux-sur-Sûre

The source of the Sauer is, as Sûre, in the southeast of Belgium in the Ardennes (Luxembourg province), on the western part of the Rhenish Massif, at an altitude of about 510 m (1,673 ft).

After flowing through Ettelbruck and Diekirch, the Sauer forms the border between Luxembourg and Germany for the last 50 km (31 mi) of its course, passing Echternach before joining, as left tributary, the Moselle in Wasserbillig, at about 132 m (433 ft) of altitude.

All content from Kiddle encyclopedia articles (including the article images and facts) can be freely used under Attribution-ShareAlike license, unless stated otherwise. Cite this article:
Sauer Facts for Kids. Kiddle Encyclopedia.