A pendulum-governed escapement of a clock, ticking every second 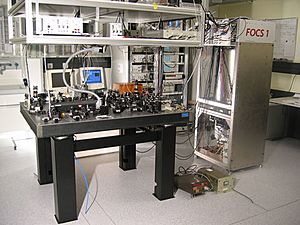 FOCS 1, a continuous cold caesium fountain atomic clock in Switzerland, started operating in 2004 at an uncertainty of one second in 30 million years.

The second (symbol: s), sometimes abbreviated sec., is the name of a unit of time. It is one of the seven SI base units. It is the time taken by 9,192,631,770 cycles of radiation that comes from electrons moving between two energy levels of the caesium-133 atom.

SI prefixes are frequently combined with the word second to denote subdivisions of the second, e.g., the millisecond (one thousandth of a second) and nanosecond (one billionth of a second). Though SI prefixes may also be used to form multiples of the second (such as “kilosecond”, or one thousand seconds), such units are rarely used in practice. More commonly encountered, non-SI units of time such as the minute, hour, and day increase by multiples of 60 and 24 (rather than by powers of ten as in the SI system).

Under the International System of Units, the second is currently defined as the duration of 9,192,631,770 periods of the radiation corresponding to the transition between the two hyperfine levels of the ground state of the caesium-133 atom. This definition refers to a caesium atom at rest at a temperature of 0 K (absolute zero). The ground state is defined at zero magnetic field. The second thus defined is equivalent to the ephemeris second.

Equivalence to other units of time

1 international second is equal to:

The factor of 60 comes from the Babylonians who used factors of 60 in their counting system. However, the Babylonians did not subdivide their time units sexagesimally (except for the day). The hour had been defined by the ancient Egyptians as either 1/12 of daytime or 1/12 of nighttime, hence both varied with the seasons. Hellenistic astronomers, including Hipparchus and Ptolemy, defined the hour as 1/24 of a mean solar day. Sexagesimally subdividing this mean solar hour made the second 1/86,400 of a mean solar day.

In 1956 the second was defined in terms of the period of revolution of the Earth around the Sun for a particular epoch, because by then it had become recognized that the Earth's rotation on its own axis was not sufficiently uniform as a standard of time. The Earth's motion was described in Newcomb's Tables of the Sun, which provides a formula for the motion of the Sun at the epoch 1900 based on astronomical observations made between 1750 and 1892. The second thus defined is

This definition was ratified by the Eleventh General Conference on Weights and Measures in 1960. The tropical year in the definition was not measured, but calculated from a formula describing a tropical year which decreased linearly over time, hence the curious reference to a specific instantaneous tropical year. Because this second was the independent variable of time used in ephemerides of the Sun and Moon during most of the twentieth century (Newcomb's Tables of the Sun were used from 1900 through 1983, and Brown's Tables of the Moon were used from 1920 through 1983), it was called the ephemeris second.

With the development of the atomic clock, it was decided to use atomic clocks as the basis of the definition of the second, rather than the revolution of the Earth around the Sun.

Following several years of work, Louis Essen from the National Physical Laboratory (Teddington, England) and William Markowitz from the United States Naval Observatory (USNO) determined the relationship between the hyperfine transition frequency of the caesium atom and the ephemeris second. Using a common-view measurement method based on the received signals from radio station WWV, they determined the orbital motion of the Moon about the Earth, from which the apparent motion of the Sun could be inferred, in terms of time as measured by an atomic clock. As a result, in 1967 the Thirteenth General Conference on Weights and Measures defined the second of atomic time in the International System of Units (SI) as

the duration of 9,192,631,770 periods of the radiation corresponding to the transition between the two hyperfine levels of the ground state of the caesium-133 atom.

The ground state is defined at zero magnetic field. The second thus defined is equivalent to the ephemeris second.

This definition refers to a caesium atom at rest at a temperature of 0 K.

The revised definition would seem to imply that the ideal atomic clock would contain a single caesium atom at rest emitting a single frequency. In practice, however, the definition means that high-precision realizations of the second should compensate for the effects of the ambient temperature (black-body radiation) within which atomic clocks operate and extrapolate accordingly to the value of the second as defined above.

The second in Role-playing games

Sometimes in role-playing games a second is used to refer to a small period of time or a single turn of combat. It is used as a standard moment of time, and does not necessarily refer to a real second, and could be shorter or longer depending on the scenario.

All content from Kiddle encyclopedia articles (including the article images and facts) can be freely used under Attribution-ShareAlike license, unless stated otherwise. Cite this article:
Second Facts for Kids. Kiddle Encyclopedia.