Midnight on a 24-hour digital clock

An hour (abbreviation: h or hr) is a unit of measurement used to measure time. An hour is equal to 60 minutes. 24 hours are equal to one day. Unlike the second, the hour is not an SI unit.

Top view of an equatorial sundial. The hour lines are spaced equally about the circle, and the shadow of the gnomon (a thin cylindrical rod) rotates uniformly. The height of the gnomon is 5⁄12 the outer radius of the dial. This animation depicts the motion of the shadow from 3 a.m. to 9 p.m. on mid-summer's day, when the Sun is at its highest declination (roughly 23.5°). Sunrise and sunset occur at 3 a.m. and 9 p.m. respectively on that day at geographical latitudes near 57.5°, roughly the latitude of Aberdeen or Sitka, Alaska. 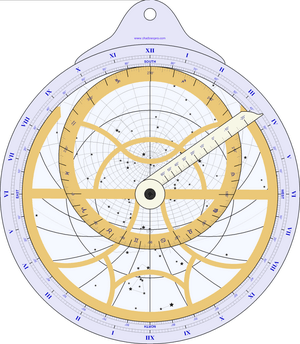 Planispheric astrolabe designed for the latitude of Varese (Italy)

Many different ways of counting the hours have been used. Because sunrise, sunset, and, to a lesser extent, noon, are the conspicuous points in the day, starting to count at these times was, for most people in most early societies, much easier than starting at midnight. However, with accurate clocks and modern astronomical equipment (and the telegraph or similar means to transfer a time signal in a split-second), this issue is much less relevant.

Astrolabes, sundials, and astronomical clocks sometimes show the hour length and count using some of these older definitions and counting methods.

In ancient and medieval cultures, the counting of hours generally started with sunrise. Before the widespread use of artificial light, societies were more concerned with the division between night and day, and daily routines often began when light was sufficient.

Sunrise marked the beginning of the first hour, the middle of the day was at the end of the sixth hour and sunset at the end of the twelfth hour. This meant that the duration of hours varied with the season. In the Northern hemisphere, particularly in the more northerly latitudes, summer daytime hours were longer than winter daytime hours, each being one twelfth of the time between sunrise and sunset. These variable-length hours were variously known as temporal, unequal, or seasonal hours and were in use until the appearance of the mechanical clock, which furthered the adoption of equal length hours.

This is also the system used in Jewish law and frequently called "Talmudic hour" (Sha'a Zemanit) in a variety of texts. The talmudic hour is one twelfth of time elapsed from sunrise to sunset, day hours therefore being longer than night hours in the summer; in winter they reverse.

The Indic day began at sunrise. The term hora was used to indicate an hour. The time was measured based on the length of the shadow at day time. A hora translated to 2.5 pe. There are 60 pe per day, 60 minutes per pe and 60 kshana (snap of a finger or instant) per minute. Pe was measured with a bowl with a hole placed in still water. Time taken for this graduated bowl was one pe. Kings usually had an officer in charge of this clock.

In so-called "Italian time", "Italian hours", or "old Czech time", the first hour started with the sunset Angelus bell (or at the end of dusk, i.e., half an hour after sunset, depending on local custom and geographical latitude). The hours were numbered from 1 to 24. For example, in Lugano, the sun rose in December during the 14th hour and noon was during the 19th hour; in June the Sun rose during the 7th hour and noon was in the 15th hour. Sunset was always at the end of the 24th hour. The clocks in church towers struck only from 1 to 12, thus only during night or early morning hours.

This manner of counting hours had the advantage that everyone could easily know how much time they had to finish their day's work without artificial light. It was already widely used in Italy by the 14th century and lasted until the mid-18th century; it was officially abolished in 1755, or in some regions customary until the mid-19th century.

The system of Italian hours can be seen on a number of clocks in Europe, where the dial is numbered from 1 to 24 in either Roman or Arabic numerals. The St Mark's Clock in Venice, and the Orloj in Prague are famous examples. It was also used in Poland and Bohemia until the 17th century.

The Islamic day begins at sunset. The first prayer of the day (maghrib) is to be performed between just after sunset and the end of twilight.

For many centuries, up to 1925, astronomers counted the hours and days from noon, because it was the easiest solar event to measure accurately. An advantage of this method (used in the Julian Date system, in which a new Julian Day begins at noon) is that the date doesn't change during a single night's observing.

In the modern 12-hour clock, counting the hours starts at midnight and restarts at noon. Hours are numbered 12, 1, 2, ..., 11. Solar noon is always close to 12 noon (ignoring artificial adjustments due to time zones and daylight saving time), differing according to the equation of time by as much as fifteen minutes either way. At the equinoxes sunrise is around 6 a.m. (Latin: ante meridiem, before noon), and sunset around 6 p.m. (Latin: post meridiem, after noon).

In the modern 24-hour clock, counting the hours starts at midnight, and hours are numbered from 0 to 23. Solar noon is always close to 12:00, again differing according to the equation of time. At the equinoxes sunrise is around 06:00, and sunset around 18:00.

All content from Kiddle encyclopedia articles (including the article images and facts) can be freely used under Attribution-ShareAlike license, unless stated otherwise. Cite this article:
Hour Facts for Kids. Kiddle Encyclopedia.