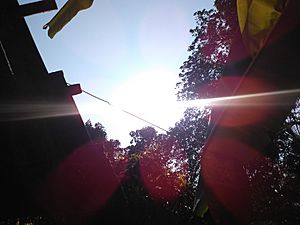 The Sun at noon from Kerala, India 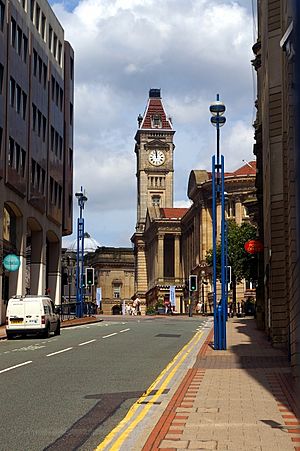 Noon is the time exactly halfway through the day, written 12.00 or 12:00 in the 24-hour clock and 12:00 pm in the 12-hour clock. Midday also means noon, although this also means around noon, or very early afternoon.

Solar noon is when the sun appears the highest in the sky, compared to its positions during the rest of the day. It occurs when the Sun is exactly halfway between sunrise (dawn) and sunset. This is also the origin of the terms a.m. and p.m., ante meridiem and post meridiem. At solar noon, the sun is due south seen from the Northern Hemisphere, and due north seen from the Southern Hemisphere. The sun is directly overhead at solar noon at the equator on the equinoxes; at Tropic of Cancer (latitude 23½°N) on the summer solstice in June; and at Tropic of Capricorn (23½°S) on the winter solstice in December.

Because of the use of time zones and daylight saving time, the highest point of the sun and a clock time of noon are usually different.

The opposite of noon is midnight.

All content from Kiddle encyclopedia articles (including the article images and facts) can be freely used under Attribution-ShareAlike license, unless stated otherwise. Cite this article:
Noon Facts for Kids. Kiddle Encyclopedia.