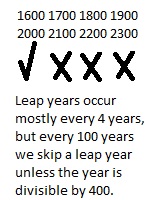 An image showing which century years are leap years in the Gregorian calendar.

A leap year is a year in which an extra day is added to the Gregorian calendar, which is used by most of the world. While an ordinary year has 365 days, a leap year has 366 days. The extra day, February 29, is added to the month of February. In an ordinary year, February has 28 days, but in a leap year, it has 29 days. The extra 29th day, called a leap day, is the same day of the week as the first day of the month, February 1. Also, in a leap year, the months of January, April, and July all start on the same day of the week.

We have leap years because instead of 365 days, the Earth really takes a few minutes less than 365-1/4 days (365.24219) to go completely around the Sun. Without leap years, the seasons would start one day earlier on the calendar every four years. After 360 years, spring (which usually begins on March 21) would begin on December 21 (which is when winter presently begins).

A number of countries use a lunar calendar (based on the moon, instead of the Sun, like our solar calendar is). They have leap years when they add an extra lunar month. Different calendars add the extra month in different ways.

On 1 January AUC 709 (45 BC), by edict, Julius Caesar reformed the historic Roman calendar to make it a consistent solar calendar (rather than one which was neither strictly lunar nor strictly solar), thus removing the need for frequent intercalary months. His rule for leap years was a simple one: add a leap day every four years. This algorithm is close to reality: a Julian year lasts 365.25 days, a mean tropical year about 365.2422 days. Consequently, the calendar drifts out 'true' by about three days every 400 years. The Julian calendar continued in use unaltered for about 1600 years until the Catholic Church became concerned about the widening divergence between the March Equinox and 21 March, as explained below.

In the modern calendar, leap day falls on 29 February. This was not always the case: when the Julian calendar was introduced, leap day was handled differently in two respects. First, leap day fell within February and not at the end. Second, the leap day was simply not counted so that a leap year still had 365 days.

The medieval Church continued the Roman practice which can be illustrated by, for example, the feast of Saint Matthias which used to be celebrated on the sixth day before the Kalends of March in both common and leap years. The calendar for February in the Book of Common Prayer of 1549 shows the position in a normal year when the feast of St Matthias is on the sixth day of the Kalends of March which is alongside 24 February. The position in a leap year is not shown in the Church of England's 1549 Book of Common Prayer but the prior insertion of the second sixth day meant the feast of St Matthias fell on 25 February in leap years. This practice ended in England some time after Henry VIII split from Rome, specifically in the 1662 edition of the Book of Common Prayer. Consecutive day counting has entirely replaced the Roman system. The feast of St Matthias is invariably on 24 February and leap day is shown at the end of February.

The Church and civil society also continued the Roman practice whereby the leap day was simply not counted so that a leap year was only reckoned as 365 days. Henry III of England's Statute De Anno et Die Bissextili of 1236 instructed magistrates to ignore the leap day when persons were being ordered to appear before the court within a year. The practical application of the rule is obscure. It was regarded as in force in the time of the famous lawyer Sir Edward Coke (1552-1634) because he cites it in his Institutes of the Lawes of England. However, Coke merely quotes the act with a short translation and does not give practical examples.

` ... and by (b) the statute de anno bissextili, it is provided, quod computentur dies ille excrescens et dies proxime præcedens pro unico dii, so as in computation that day excrescent is not accounted.'

In the Gregorian calendar, the standard calendar in most of the world, most years that are multiples of 4 are leap years. In each leap year, the month of February has 29 days instead of 28. Adding one extra day in the calendar every four years compensates for the fact that a period of 365 days is shorter than a tropical year by almost 6 hours. Some exceptions to this basic rule are required since the duration of a tropical year is slightly less than 365.25 days. The Gregorian reform modified the Julian calendar's scheme of leap years as follows:

All content from Kiddle encyclopedia articles (including the article images and facts) can be freely used under Attribution-ShareAlike license, unless stated otherwise. Cite this article:
Leap year Facts for Kids. Kiddle Encyclopedia.