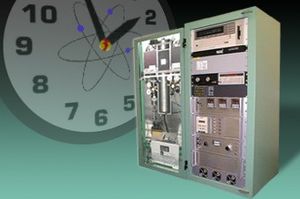 An atomic clock is a clock that works with atoms, as opposed to most other clocks which are mechanical. The frequency comes from the crossing radiation of electrons. Atomic clocks are currently the most exact clocks of the world. They are also called primary clocks.

Worldwide, there are over 260 atomic clocks at over 60 different places. All data is collected at the International Bureau of Weights and Measures in Paris, France. The International Atomic Time is calculated there.

The basics were developed by Isidor Isaac Rabi. He was an American physicist at Columbia University. He got the Nobel Prize in Physics in 1944.

All content from Kiddle encyclopedia articles (including the article images and facts) can be freely used under Attribution-ShareAlike license, unless stated otherwise. Cite this article:
Atomic clock Facts for Kids. Kiddle Encyclopedia.