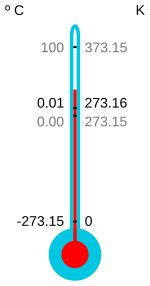 Absolute zero is the temperature at which the particles of matter (molecules and atoms) are at their lowest energy points. Some people think that at absolute zero particles lose all energy and stop moving. This is not correct. In quantum physics there is something called zero point energy, which means that even after all the energy from particles has been removed, the particles still have some energy. This is due to Heisenberg's uncertainty principle, which states that the more that is known about a particle's position, the less that can be known about its momentum, and vice versa. Therefore, a particle cannot be completely stopped because then its exact position and momentum would be known.

The Third Law of Thermodynamics says that nothing can ever have a temperature of absolute zero.

The Second Law of Thermodynamics says that all engines that are powered by heat (like car engines and steam train engines) must release waste heat and can not be 100% efficient. This is because the efficiency (percent of energy the engine uses up that is actually used to do the engine's job) is 100%×(1-Toutside/Tinside), which only is 100% if the outside temperature is absolute zero which it cannot be. So, an engine cannot be 100% efficient, but you can make its efficiency closer to 100% by making the inside temperature hotter and/or the outside temperature colder.

All content from Kiddle encyclopedia articles (including the article images and facts) can be freely used under Attribution-ShareAlike license, unless stated otherwise. Cite this article:
Absolute zero Facts for Kids. Kiddle Encyclopedia.