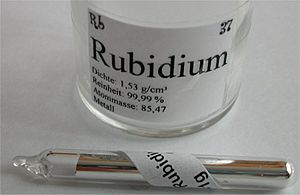 Rubidium in a glass tube

Rubidium is chemical element 37 on the periodic table. Its symbol is Rb. Its atomic mass is 85.47. It has 37 protons and 37 electrons. It is a soft silver colored metal. It was first discovered in 1861 by Robert Bunsen and Gustav Kirchoff in Heidelberg, Germany.

Rubidium melts at a very low temperature, for example it could melt in a person's hand. Rubidium is an alkali metal. It can make an amalgam with mercury.

Rubidium is very reactive. It will ignite in air because it reacts with many other elements in the air like oxygen and nitrogen. Rubidium reacts very violently with water to make hydrogen and rubidium hydroxide, a strong corrosive base. The reaction is normally very hot so the hydrogen ignites. 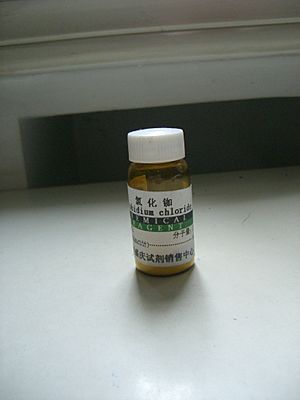 Rubidium is about as common as zinc. It is the 23rd most common element in the Earth's crust. Most minerals only have a small amount of rubidium in them. It normally comes in small quantities in other minerals. It is made by reduction of rubidium ores with calcium. It is expensive because calcium is difficult to make and the rubidium needs to be kept in argon and away from water or air.

There are not many common uses for rubidium. Rubidium compounds are sometimes used in purple fireworks. It and its compounds are used mainly in science research though. It is also used to make superoxide ions. It is used in some special types of glass.

Rubidium compounds are not very dangerous in the human body; however, if a person gets too much from eating, they could get sick because it acts like other alkali metal ions such as sodium ions in sodium chloride. Rats can live with up to half of their potassium replaced with rubidium, though it is not likely for that to happen.

Rubidium is very dangerous. It reacts with air and water and makes corrosive substances.

All content from Kiddle encyclopedia articles (including the article images and facts) can be freely used under Attribution-ShareAlike license, unless stated otherwise. Cite this article:
Rubidium Facts for Kids. Kiddle Encyclopedia.