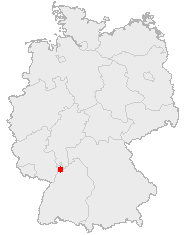 Heidelberg is a city by the Neckar river in the south-west of Germany in the state of Baden-Württemberg.

It has about 150,000 inhabitants and a well-known university. The old town and the castle of Heidelberg are well-known tourist attractions of Germany. 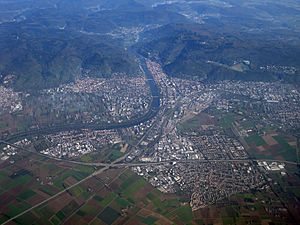 Heidelberg is in the Rhine Rift Valley, on the left bank of the lower part of the Neckar in a steep valley in the Odenwald. It is bordered by the Königsstuhl (568 m) and the Gaisberg (375 m) mountains. The Neckar here flows in an east-west direction. On the right bank of the river, the Heiligenberg mountain rises to a height of 445 meters. The Neckar flows into the Rhine approximately 22 kilometres north-west in Mannheim. Villages incorporated during the 20th century stretch from the Neckar Valley along the Bergstraße, a road running along the Odenwald hills. 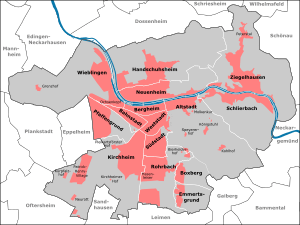 The districts of Heidelberg 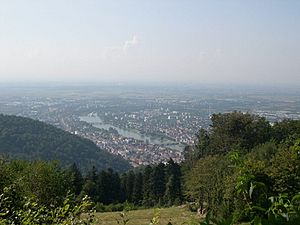 Since Heidelberg is among the warmest regions of Germany, plants atypical of the central-European climate flourish there, including almond and fig trees; there is also an olive tree in Gaisbergstraße. Alongside the Philosophenweg (Philosophers' Walk) on the opposite side of the Old Town, winegrowing was restarted in 2000.

Heidelberg has an oceanic climate (Köppen climate classification Cfb), defined by the protected valley between the Pfälzerwald and the Odenwald. Year-round, the mild temperatures are determined by maritime air masses coming from the west. In contrast to the nearby Upper Rhine Plain, Heidelberg's position in the valley leads to more frequent easterly winds than average. The hillsides of the Odenwald favour clouding and precipitation. The warmest month is July, the coldest is January. Temperatures often rise beyond 30 °C (86 °F) in midsummer. According to the German Meteorological Service, Heidelberg was the warmest place in Germany in 2009.

This panorama from the Theodor-Heuss-Brücke shows the Neckar running through Heidelberg. On the left is Neuenheim, with its Neckarwiesen (Neckar meadows); on the right is the Altstadt. 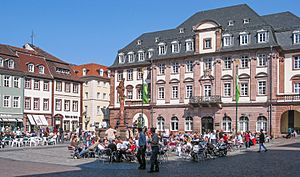 The marketplace, with Town Hall on the right 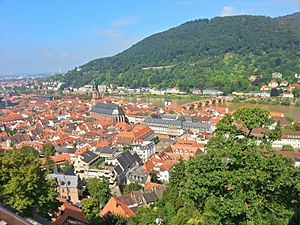 Heidelberg's old city centre from the castle above 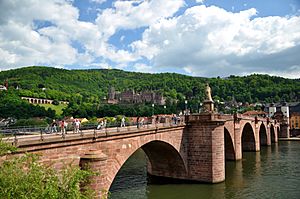 Heidelberg Castle with the Old Bridge in foreground, 2010 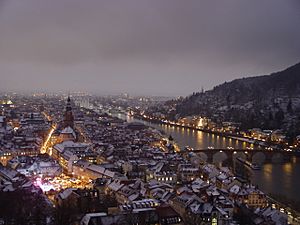 View from the castle during winter, 2014

The "old town" (German: Altstadt), on the south bank of the Neckar, is long and narrow. It is dominated by the ruins of Heidelberg Castle, 80 metres above the Neckar on the steep wooded slopes of the Königstuhl (King's chair or throne) hill. 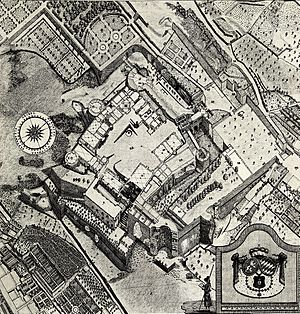 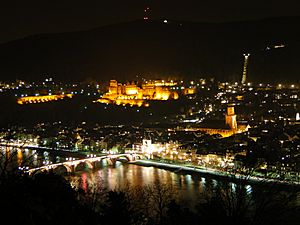 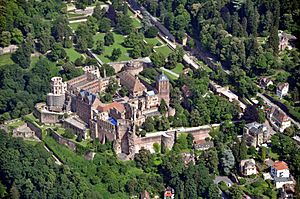 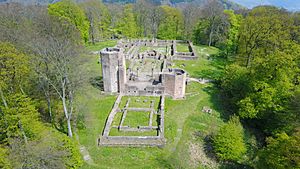 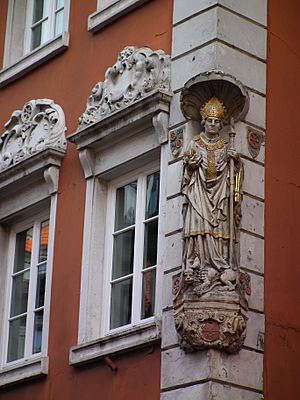 Statue of Bishop in Altstadt

The castle is a mix of styles from Gothic to Renaissance. Prince Elector Ruprecht III (1398–1410) erected the first building in the inner courtyard as a royal residence. The building was divided into a ground floor made of stone and framework upper levels. Another royal building is located opposite the Ruprecht Building: the Fountain Hall. Prince Elector Philipp (1476–1508) is said to have arranged the transfer of the hall's columns from a decayed palace of Charlemagne from Ingelheim to Heidelberg.

In the 16th and 17th centuries, the Prince Electors added two palace buildings and turned the fortress into a castle. The two dominant buildings at the eastern and northern side of the courtyard were erected during the rule of Ottheinrich (1556–1559) and Friedrich IV (1583–1610). Under Friedrich V (1613–1619), the main building of the west side was erected, the so-called "English Building".

The castle and its garden were destroyed several times during the Thirty Years' War and the Palatine War of Succession. As Prince Elector Karl Theodor tried to restore the castle, lightning struck in 1764, and ended all attempts at rebuilding. Later on, the castle was misused as a quarry; stones from the castle were taken to build new houses in Heidelberg. This was stopped in 1800 by Count Charles de Graimberg, who then began the process of preserving the castle.

Although the interior is in Gothic style, the King's Hall was not built until 1934. Today, the hall is used for festivities, e.g. dinner banquets, balls and theatre performances. During the Heidelberg Castle Festival in the summer, the courtyard is the site of open air musicals, operas, theatre performances, and classical concerts performed by the Heidelberg Philharmonics.

The castle is surrounded by a park, where the famous poet Johann von Goethe once walked. The Heidelberger Bergbahn funicular railway runs from Kornmakt to the summit of the Königstuhl via the castle.

All content from Kiddle encyclopedia articles (including the article images and facts) can be freely used under Attribution-ShareAlike license, unless stated otherwise. Cite this article:
Heidelberg Facts for Kids. Kiddle Encyclopedia.