The title of this article contains the character ß. Where it is unavailable or not wanted, the name may be written as Bergstrasse.

This article is about the mountain tourist route. For other uses, see Bergstraße. 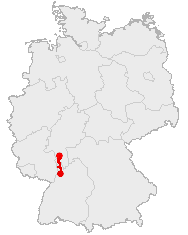 Bergstraße ("Mountain Road") is the name of a mountain route, and the area around it, which stretches across the western edge of the Odenwald in southern Hesse and northern Baden-Württemberg, Germany.

The route goes almost straight from north to south at the spot where the Rhine lowlands meet the western edge of the Odenwald. The name comes from the road's route along the foot of the mountains, the Rhine lowlands once being too damp to build a road there.

The route mostly follows the modern B3 road. It begins in Darmstadt and, after passing through Eberstadt, splits into the "Old Bergstraße" and the "New Bergstraße", which goes somewhat farther to the west. The two routes meet again at Zwingenberg. 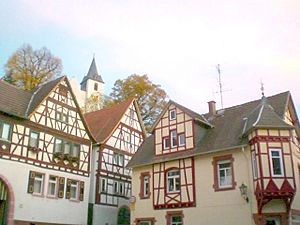 In Weinheim-Lützelsachsen the route splits into an old and a new Bergstraße again. The new one passes west of the old route as far as Heidelberg-Handschuhsheim, where the two meet once more. The route carrying on after the Neckar from Heidelberg to Wiesloch is still usually known as the Bergstraße, even though the type of country and climate typical of the Bergstraße is no longer as clear.

All content from Kiddle encyclopedia articles (including the article images and facts) can be freely used under Attribution-ShareAlike license, unless stated otherwise. Cite this article:
Bergstraße Route Facts for Kids. Kiddle Encyclopedia.