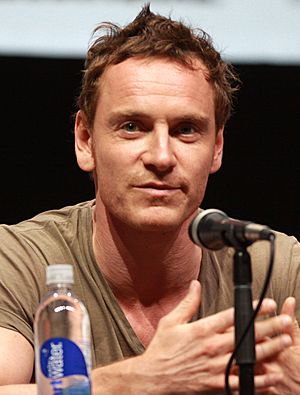 Fassbender was born in Heidelberg, Baden-Württemberg, West Germany (now Germany). His mother, Adele, is Irish and his father, Josef, is German. When he was two years old, his parents moved to Killarney, County Kerry, in the Republic of Ireland. He lives in London, England. He is fluent in both English and German.

All content from Kiddle encyclopedia articles (including the article images and facts) can be freely used under Attribution-ShareAlike license, unless stated otherwise. Cite this article:
Michael Fassbender Facts for Kids. Kiddle Encyclopedia.