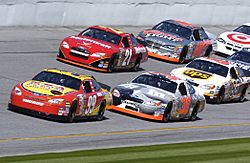 Practice for a Daytona 500 race

The Daytona International Speedway is a race track in Daytona Beach, Florida. It is where the two exhibition races, the Advance Auto Parts Clash, Can-Am Duel, and the two points-paying races, the Daytona 500 and Coke Zero Sugar 400 is held. The track is also where the Rolex 24 at Daytona is held, and also two Xfinity Series races and one Camping World Truck Series race.

Daytona speedway was built in 1959. Races had been held on the hard sandy beach since 1902. Racing on the beach ended in 1959 when Daytona International Speedway opened. Bill France, Jr. was behind the construction of the speedway. The first race was won by Lee Petty in a field of 59 cars. In 1962, the first major race on the road course was held. It was won by Grand Prix driver Dan Gurney driving a red Lotus. Near the end of the race and with a 2 minute lead, his engine failed. He coasted across the finish line to win.

By the 1960s, the sportscar race was made into a 24 hour race. This required multiple drivers for each car and involved a long period of racing at night. Both races grew in popularity in the 1970s and 80s. Today the Daytona 500 is an important race in NASCAR. The Rolex 24, which is named that because it is sponsored by the Rolex watch company, is an important endurance race.

All content from Kiddle encyclopedia articles (including the article images and facts) can be freely used under Attribution-ShareAlike license, unless stated otherwise. Cite this article:
Daytona International Speedway Facts for Kids. Kiddle Encyclopedia.