The city is historically known for its beach where the hard-packed sand allows motorized vehicles to drive on the beach in restricted areas. This hard-packed sand made Daytona Beach a mecca for motorsports, and the old Daytona Beach Road Course hosted races for over 50 years. This was replaced in 1959 by Daytona International Speedway. The city is also the headquarters for NASCAR.

Daytona Beach hosts large groups of out-of-towners that descend upon the city for various events, notably Speedweeks in early February when over 200,000 NASCAR fans come to attend the season-opening Daytona 500. Other events include the NASCAR Coke Zero 400 race in July, Bike Week in early March, Biketoberfest in late October, and the 24 Hours of Daytona endurance race in January.

The area where Daytona Beach is today was once inhabited by the indigenous Timucuan Indians who lived in fortified villages. The Timucuas were nearly exterminated by contact with Europeans through war, enslavement and disease and became extinct as a racial entity through assimilation and attrition during the 18th century. The Seminole Indians, descendants of Creek Indians from Georgia and Alabama, frequented the area prior to the Second Seminole War. 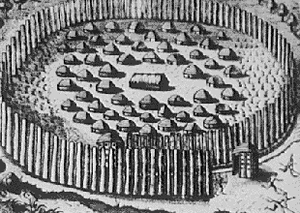 During the era of British rule of Florida between 1763 and 1783, the King's Road passed through present-day Daytona Beach. The road extended from St. Augustine, the capital of East Florida, to Andrew Turnbull's experimental colony in New Smyrna. In 1804 Samuel Williams received a land grant of 3,000 acres (12 km2) from the Spanish Crown, which had regained Florida from the British after the American Revolution. This land grant encompassed the area that would become Daytona Beach. Williams built a slave-labor-based plantation to grow cotton, rice and sugar cane. His son Samuel Hill Williams would abandon the plantation during the Second Seminole War, when the Seminoles burned it to the ground.

In 1871, Mathias Day, Jr. of Mansfield, Ohio, purchased a 2,144.5 acre tract of the former Williams Plantation, on the west bank of the tidal channel known as the Halifax River. He built a hotel around which the initial section of town, today the Daytona Beach Historic District, arose. In 1872, due to financial troubles, Day lost title to his land; nonetheless, residents decide to name the city Daytona in his honor, and incorporated the town in 1876.

In 1886, the St. Johns & Halifax River Railway arrived in Daytona. The line would be purchased in 1889 by Henry M. Flagler, who made it part of his Florida East Coast Railway. The separate towns of Daytona, Daytona Beach, Kingston, and Seabreeze merged as "Daytona Beach" in 1926, at the urging of civic leader J.B. Kahn and others. By the 1920s, it was dubbed "The World's Most Famous Beach".

On March 8, 1936, the first stock car race was held on the Daytona Beach Road Course, located in the present-day Town of Ponce Inlet. In 1958, William France Sr. and NASCAR created the Daytona International Speedway to replace the beach course. Automobiles are still permitted on most areas of the beach, at a maximum speed of 10 mph (16 km/h). 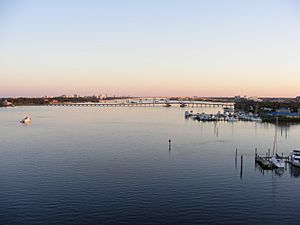 The city of Daytona Beach is split in two by the Halifax River lagoon, part of the Intracoastal Waterway, and sits on the Atlantic Ocean. It is bordered on the north by Holly Hill and Ormond Beach and on the south by Daytona Beach Shores, South Daytona and Port Orange.

Daytona Beach has a humid subtropical climate (Köppen climate classification Cfa) – typical of the Gulf and South Atlantic states. As is typical of much of Florida, there are two seasons in Daytona Beach, the warmer, wetter season (late May through October) and the cooler and drier season (November through April).

In summer, average daytime highs are in the 80s and low 90s (26 to 33 °C) and average night-time lows are near 70 °F (21 °C) in Daytona Beach. The Bermuda High pumps hot and unstable tropical air from the Bahamas and Gulf of Mexico, resulting in daily, but brief thundershowers. A large amount of the yearly rainfall in Daytona Beach falls during this time of year. Fall and spring are transitional seasons, with daily highs in the 75 to 80 F (21 to 24 °C) range and overnight lows in the 50s to low 60s (10 to 17 °C).

In winter, Daytona Beach has weather conditions typical of cities on the Florida peninsula. The coolest months are from December through February; average daytime highs range from 65 to 70 °F (18 to 21 °C) and nighttime lows are near 50 F (10 °C). Occasional cold fronts often drop the daytime temperatures into the 50s F with nights in the 30s F a few times each month. Like much of Florida, Daytona Beach often can be very dry in late winter and early spring, and brush fires and water restrictions can be an issue. Daytona Beach averages only 6 frosts per year according to the National Weather Service office in Melbourne. There is no record of snow on the ground in Daytona Beach in the last 109 years; however, snow flurries have been observed twice since 1880 – on January 1, 1977 and in January 2010. 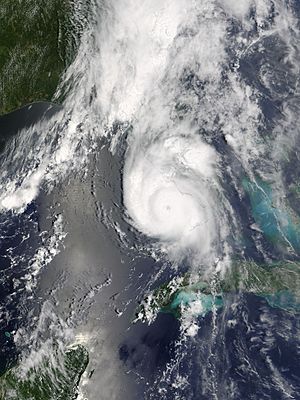 Although Daytona Beach has a significantly lesser tornado risk than areas like the Great Plains and Midwest, there have been a few deadly and destructive tornadoes in the last 100 years in Daytona Beach area. Most recently, on February 22, 1998 a tornado killed 3 people, injured 70 people, and caused $31 million in damages.

On July 3, 1992, a 28-mile (45 km) long rogue wave hit the Volusia County beaches. The wave's range was from Ormond Beach in the north, to New Smyrna Beach on the south. The crest was 9 feet (2.7 m) high and centered at Daytona Beach. Sailboats crashed ashore onto cars and many people suffered cuts and bruises from glass and debris. Two people required hospitalization and 200 vehicles were damaged. 75 injuries were reported. The prevailing theory is that an underwater landslide caused the rogue wave, although others have theorized that it was the result of a squall line.

As of 2000, English spoken as a first language accounted for 90.37% of all residents, while 9.62% spoke other languages as their mother tongue. The most significant were Spanish speakers who made up 4.01% of the population, while French came up as the third most spoken language, which made up 0.90%, and German was at fourth, at 0.86%, as well as, Arabic with 0.66% of the population. 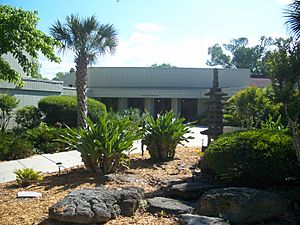 Museum of Arts and Sciences

The Museum of Arts and Sciences is the primary cultural facility for Daytona Beach and Volusia County. Other museums located in the city include the Southeast Museum of Photography and the Halifax Historical Museum. The Museum of Arts and Sciences is actually a collection of museums and galleries and includes the Klancke Environmental Complex, the Cuban Museum, Root Family Museum featuring one of the largest Coca-Cola collections in the world, the Dow American Gallery and the Bouchelle Center for Decorative Arts which together form what is probably one of the finest collections of furniture and decorative arts in the Southeast. There are also changing exhibitions and a children's science center opened in 2008. Since 1952, the non-profit Daytona Beach Symphony Society has sponsored performances by U.S. and international orchestras, opera and dance companies each season at the Peabody Auditorium.

The city attracts over 8,000,000 tourists each year. Special events that draw visitors to Daytona Beach include:

During motorcycle events (Bike Week and Biketoberfest), several hundred thousand bikers from all over the world visit the greater Daytona Beach area. The city is also often associated with spring break, though the efforts of the local government to discourage rowdiness, combined with the rise of other spring break destinations, have affected Daytona's preeminence as a spring break destination. It is the destination of Dayton 2 Daytona, an annual event that draws over 3,000 University of Dayton college students since 1977. 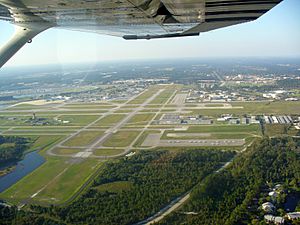 Passenger airline services are located at Daytona Beach International Airport (DAB), which is centrally located within the city adjacent to Daytona International Speedway. The site was first used as an airport with terminals being constructed in 1952 and 1958. The present facility was constructed in 1992 at the cost of $46 million, and includes both a domestic terminal and an International terminal. Despite the new facilities, DAB has found difficulty in attracting and retaining carriers; Continental Airlines, AirTran Airways, and United Airlines discontinued flights to Daytona in 2007 and 2008. LTU & American Airlines also serviced Daytona Beach during the 1980s and 1990s, both of which ended all flights in 1994 & 1997.

Current passenger airlines serving DAB include Delta Air Lines (with nonstop service to Atlanta), American Airlines (with non-stop service to Charlotte), and JetBlue Airways (with non-stop service to New York-JFK). All three carriers offer connecting service from those cities to destinations worldwide. International flights from DAB fly to destinations in the Bahamas through air taxi and charter services Airgate Aviation and IslandPass; non-stop flights are available from DAB to Marsh Harbour, Treasure Cay, and North Eleuthera. DAB is also heavily used for general aviation, largely due to Embry–Riddle Aeronautical University, whose campus is located at the airport. 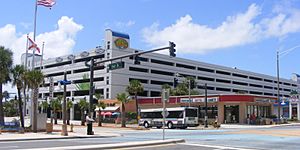 The Volusia County Parking Garage in Daytona Beach provides a place for visitors to park and walk around.

Daytona Beach is easily accessible by I-95 that runs North and South and I-4 connecting Daytona Beach with Orlando and Tampa. U.S. 1 (Ridgewood Avenue) also passes through Daytona Beach. A1A is a scenic North/South route along the beach.

The Volusia County Parking Garage is located at 701 Earl Street at North Atlantic Avenue (A1A). The garage is strategically located, next to the Ocean Center, Daytona Lagoon, and across the street from the Hilton Hotel and Ocean Walk Shoppes. Over one thousand parking spaces are available inside the garage, which also houses an intermodal transfer station for VoTran.

Passenger railroad service to Daytona Beach was established no later than 1889 by the Jacksonville, St. Augustine and Halifax River Railway, predecessor of the Florida East Coast Railroad (FEC). Passenger trains continued calling at Daytona Beach till 1968, when the FEC terminated passenger operations system-wide.

Novels set in Daytona Beach include:

There have been a number of movies based on Daytona Beach, usually with a racing theme. The most recent example was the 1990 hit Days of Thunder, parts of which were filmed in Daytona Beach and nearby DeLand. Chris Rea wrote the song "Daytona" which was in his 1989 album The Road to Hell. Suzi Quatro's song "Daytona Demon" is often believed to refer to the city. Also, about half of the video for the song "Steal My Sunshine" by Len was filmed at Daytona Beach.

Daytona Beach was also the destination of a group of plagued teenagers in the movie Final Destination 2.

Daytona Beach was also one of the settings in the 2008 film Marley & Me.

All content from Kiddle encyclopedia articles (including the article images and facts) can be freely used under Attribution-ShareAlike license, unless stated otherwise. Cite this article:
Daytona Beach, Florida Facts for Kids. Kiddle Encyclopedia.