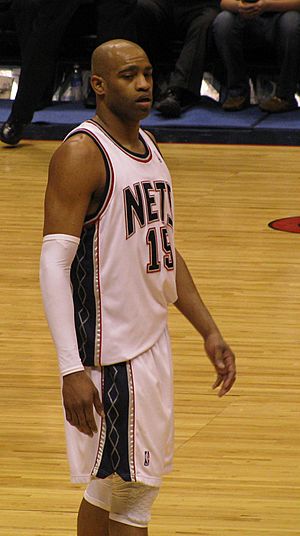 Vince Carter with the Nets

Vincent Lamar Carter (born January 26, 1977) is an American professional basketball player. He plays as a shooting guard or small forward for the Atlanta Hawks of the National Basketball Association (NBA). He has also played for the Toronto Raptors, New Jersey Nets, Orlando Magic, Memphis Grizzlies, Phoenix Suns, and Dallas Mavericks.

After being drafted in 1998 as the fifth overall pick, Carter quickly emerged as a league star.

Carter is an eight-time NBA all-star. In 1999, he won the NBA Rookie of the Year Award. In 2000, he won the Slam Dunk Contest at the NBA All-star Weekend. 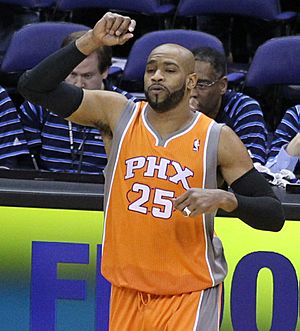 Vince Carter with the Suns

His talent for slam-dunks earned him nicknames such as "Vinsanity," "Air Canada," and "Half-Man, Half-Amazing.". Vince led his first team, the Toronto Raptors to their first three playoff appearances. Despite his notability as an exceptional basketball player, he has yet to win a championship.

All content from Kiddle encyclopedia articles (including the article images and facts) can be freely used under Attribution-ShareAlike license, unless stated otherwise. Cite this article:
Vince Carter Facts for Kids. Kiddle Encyclopedia.