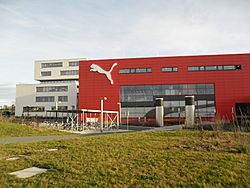 PUMA AG is a German multinational company that designs and manufactures athletic and casual footwear, apparel and accessories, which is headquartered in Herzogenaurach, Bavaria, Germany.

PUMA is the third largest sportswear manufacturer in the world.

As of 2017, Puma SE employs more than 13,000 people worldwide and distributes its products in more than 120 countries.

All content from Kiddle encyclopedia articles (including the article images and facts) can be freely used under Attribution-ShareAlike license, unless stated otherwise. Cite this article:
Puma (brand) Facts for Kids. Kiddle Encyclopedia.