Neymar da Silva Santos Junior, known as Neymar or Neymar Jr. (born 5 February 1992 in Magi das Cruz's, Brazil), is a Brazilian footballer that can play as a left or right Winger or as a Striker. He plays for the French team Paris Saint-Germain. He plays for the Brazil national football team at international level.

He has been compared to former Barcelona teammate Lionel Messi and also to Cristiano Ronaldo and Pelé.

Neymar was born in São Paulo, Brazil. His father was a former footballer. In 2003, Neymar began playing for Portuguesa Santista. Later that year, He and his family moved to Santos, São Paulo, where he joined Santos FC. He signed his first professional contract at age 17. 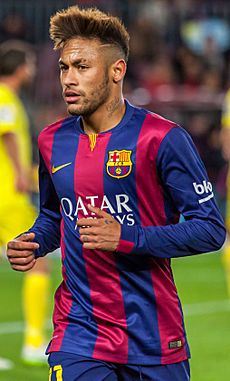 Neymar joined Santos in 2003 and on March 7 2009, he made his debut for Santos at 17 years of age. He scored his first goal against Mogi Mirim, a week after his debut. On April 15 2010, Neymar scored five goals for Santos, beating Guarani 8-1 in the Brazilian Cup. Later, the club would win the cup. Neymar got red carded for wearing a mask in his goal celebration.

In the summer of 2013, Neymar was bought by the Spanish club FC Barcelona for 57 million euros.

In August 2017, he was bought by the French club Paris Saint-Germain for a world record-breaking €222 million, making him the most expensive transfer of all time. 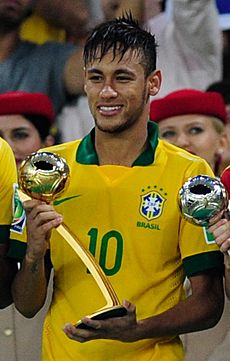 Neymar with the Golden Ball award for best player at the 2013 Confederations Cup. 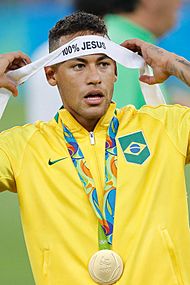 Neymar expresses his Christian faith after winning the gold medal with Brazil at the 2016 Summer Olympics.

All content from Kiddle encyclopedia articles (including the article images and facts) can be freely used under Attribution-ShareAlike license, unless stated otherwise. Cite this article:
Neymar Facts for Kids. Kiddle Encyclopedia.