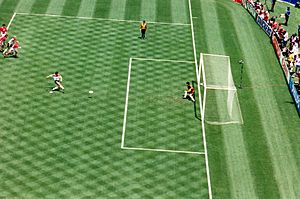 A penalty kick (short pen) is a type of free kick in football. The ball is 11 meters away from the goal post. A penalty kick is taken by the team which has been fouled if the violent act is made in the penalty box.

Penalties can also happen in a penalty shootout, when there is a draw in a match even after added extra time.

All content from Kiddle encyclopedia articles (including the article images and facts) can be freely used under Attribution-ShareAlike license, unless stated otherwise. Cite this article:
Penalty kick Facts for Kids. Kiddle Encyclopedia.