Carrossel (English: Carousel) is a Brazilian children's telenovela created by Íris Abravanel and written by Abel Santa Cruz. The TV show originally aired on SBT from 21 May 2012 to 26 July 2013. It is a Brazilian remake of the Mexican telenovela Carrusel (which in turn had been inspired by the Argentinean telenovela Jacinta Pichimahuida, la Maestra que no se Olvida). The Telenovela was particularly successful with children and led to several spin-offs including a cartoon series and television sitcom.

A theatrical film based on the novela was released on 23 July 2015, Carrossel: O Filme [pt].

Helena Fernandes is a young and beautiful teacher starting her career. Her first job is at the Escola Mundial (English: World School), teaching the principles of life to a third-grade class. Her warm and kindly nature wins the love of her students, all of whom have different personalities. At school, Helena has the support of employees Graça and Firmino, who love the students. But she has to endure the rules and requirements of Olívia, the director of the institution, and the envy of Suzana, a teacher who comes in to replace her for a period.

Outside of school, the children form a club led by Daniel called "Patrulha Salvadora" (English: Saving Patrol). They gather in an abandoned house and help children who are not enrolled at Escola Mundial. These include: Tom, a wheelchair-bound boy who lives with his mother Glória, a teacher; Clementina, a girl who is trapped inside her own house; and Abelardo Cruz, a mischievous boy who lives with his grandfather, who is in turn fighting with his father.

The action takes place in Escola Mundial, which is coordinated and organized by severe Director Olívia. The Portuguese Firmino Gonçalves and flustered Graça are responsible for cleaning and guarding the school. Several students also have special circumstances: Mário Ayala is embittered by the death of his mother, his father's absence, and his rude stepmother; Cirilo suffers from the bias of Maria Joaquina; Jaime has low grades; Marcelina puts up with the antics of her brother Paulo; and Carmen fights with her parents.

Renê, an old school friend of Suzana, is hired to replace Escola Mundial music teacher, Matilde. Renê meets Helena at a party and they fall in love, but Suzana is also in love with him and tells several lies to Helena so that she will stay away from him. 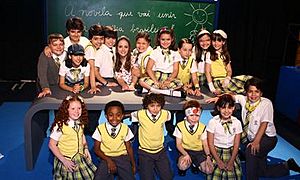 The main characters of Carrossel

On 22 February 2013 SBT and Super Toons confirmed they would launch in the second half of the 2013 animated spin-off of the telenovela. Production began with nine episodes of 26 minutes, which was intended to be shown across Latin America.

Also a few chapters before the premiere of the telenovela Chiquititas, which replaced Carrossel in the schedule, a mini-journal called "Carrossel TV" was aired with the characters of Carrossel presenting. The skit was performed with Valéria, Maria Joaquina, Cirilo, Jaime and Kokimoto doing interviews with the characters of Chiquititas. In the break between series SBT created a children's afternoon program called Clube do Carrossel with the same structure of other children's programs on the channel, like Bom Dia & Companhia, featuring cartoons and segments with viewers.

In 2014 Patrulha Salvadora was released which was supposed to be a continuation of the telenovela focused on action and suspense, with characters that were superheroes.

All content from Kiddle encyclopedia articles (including the article images and facts) can be freely used under Attribution-ShareAlike license, unless stated otherwise. Cite this article:
Carrossel Facts for Kids. Kiddle Encyclopedia.