Carrusel is a Mexican children's telenovela produced by Valentín Pimstein for Televisa in 1989. It's based on the Argentinean character (first televised in 1966), and produced by and broadcast on Televisa in 1989. It covers daily life in a Mexican elementary school and the children's relationships with a charismatic teacher named Ximena. Among other plot devices, it deals with the differences between the upper and lower classes of Mexican society – specifically as seen in a romantic relationship between Cirilo, a poor black boy, and a spoiled white rich girl, Maria Joaquina Villaseñor.

The story begins with the daily lives of a group of schoolchildren from a Mexican primary school ("Escuela Mundial") and the relations of the latter with their teacher, Ximena. In the series, several issues about life, while stressing values such as love, trust and friendship touched.

The character of school 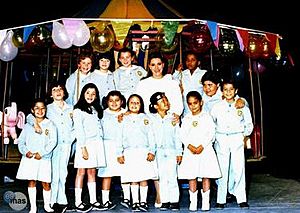 The main characters of Carrusel

All content from Kiddle encyclopedia articles (including the article images and facts) can be freely used under Attribution-ShareAlike license, unless stated otherwise. Cite this article:
Carrusel Facts for Kids. Kiddle Encyclopedia.