São Paulo is one of the 26 states of the Federative Republic of Brazil and is named after Saint Paul of Tarsus. The economy of São Paulo state is the most developed in Brazil.

The local population is one of the most diverse in the country and descended mostly from Italians, who began immigrating to the country in the late 19th century; of the Portuguese, who colonized Brazil and installed the first European settlements in the region; indigenous peoples, many distinct ethnic groups; Africans, who were brought from Africa as enslaved people in the colonial era and migrants from other regions of the country. In addition, Arabs, Germans, Spanish, Japanese, Chinese, and Greeks also are present in the ethnic composition of the local population.

The city of São Paulo, the homonymous state capital, is ranked as the world's 12th largest city and its metropolitan area, with 20 million inhabitants, is the 9th largest in the world and first in the Americas. 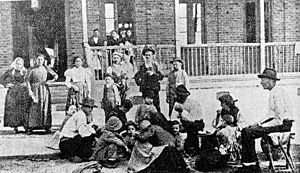 The area that today corresponds to the state territory was already inhabited by indigenous peoples from approximately 12,000 BC. In the early 16th century, the coast of the region was visited by Portuguese and Spanish explorers and navigators. In 1532 Martim Afonso de Sousa would establish the first Portuguese permanent settlement in the Americas—the village of São Vicente, in the Baixada Santista.

In the 17th century, the paulistas bandeirantes intensified the exploration of the interior of the colony, which eventually expanded the territorial domain of Portugal and the Portuguese Empire in South America. In the 18th century, after the establishment of the Province of São Paulo, the region began to gain political weight.

After independence in 1820, São Paulo began to become a major agricultural producer (mainly coffee) in the newly constituted Empire of Brazil, which ultimately created a rich regional rural oligarchy, which would switch on the command of the Brazilian government with Minas Gerais's elites during the early republican period in the 1880s.

Under the Vargas Era, the state was one of the first to initiate a process of industrialization and its population became one of the most urban of the federation. 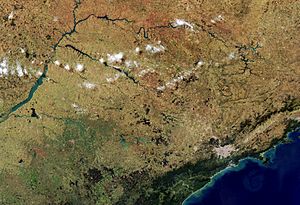 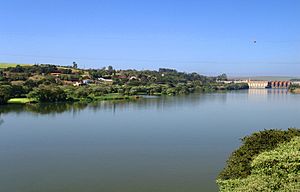 Tiete River in the dam between the towns of Barra Bonita and Igaraçu do Tietê.

São Paulo is one of 27 states of Brazil, located southwest of the Southeast Region. The state area is 248,222.362 km2 (95,839.190 sq mi), most of the north of the Tropic of Capricorn, and the 12th unit of the Brazilian federation in area and the second in the Southeast region, behind only Minas Gerais. The state has a relatively high relief, having 85 percent of its surface between three hundred and nine hundred meters above sea level, 8 percent below three hundred meters and 7 percent over nine hundred meters.

The distance between its north and south end points is 611 km (380 mi), and 923 km (574 mi) between the east-west extremes. The state time zone follows the Brasilia time, which is three hours late in relation to the Greenwich Meridian. It is limited to the states of Minas Gerais to the north and northeast, the Paraná to the south, Rio de Janeiro to the east, Mato Grosso do Sul to the west, and the Atlantic Ocean to the southeast.

The coastline consists of plains below 300 metres (980 ft), that border the Serra do Mar. Located in the Serra da Mantiqueira, Mine Stone, with 2,798 metres (9,180 ft) above sea level, is the highest point the state territory and the fifth in the country.

São Paulo has its territory divided into 21 watersheds, inserted in three river basin districts, the largest of which is the Paraná, which covers much of the state territory. Noteworthy is the Rio Grande, which born in Minas Gerais and join with Paranaiba to form the Parana River, which separates São Paulo from Mato Grosso do Sul.

Two major rivers Paulistas tributaries of the left bank of the Paraná River are the Paranapanema, which is 930 km (580 mi) long and a natural divider between São Paulo and Paraná in most of its course, and the Tiete River, which has a length of 1,136 km (706 mi) and runs through the state territory from southeast to northwest, from its source in Salesópolis, to its mouth in the city of Itapura.

Beach Bewitched, in the municipality of Ilhabela. The climate is tropical.

The state territory covers seven distinct climatic types, taking into account the temperature and rainfall. In the mountain areas of the state, there are subtropical climate (Cfa in Köppen climate classification), in areas of high altitude such as the Serra do Mar e Serra da Mantiqueira, having humid, hot summers and average temperatures below 18 °C (64 °F) in the month cooler year; and oceanic (Cfb and Cwb) with regular and well distributed throughout the year and warmer summers rains.

On the coast, the climate is super-humid tropical type, very similar to the prevailing equatorial climate in the Amazon (Af), with rainfall exceeding sixty monthly millimeters in every month of the year, without the existence of a dry season. The tropical climate of altitude (Cwa), predominant in the state territory, specifically in the center of the state, is characterized by a summer rainy season and a dry season in winter, with temperatures above 22 °C (72 °F) in the hottest month of the year. In other areas, there is tropical savanna climate (Aw) with rainfall less than 60 millimetres (2.4 in) in one or more months of the year and warmer, with average temperatures above 18 °C (64 °F) during the year. There are also small areas with characteristics of monsoons (Am). 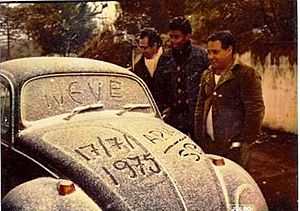 The occurrence of snow is very rare, but has been recorded in Campos do Jordão and there are also reports that the phenomenon has occurred in several parts of the south of the state, except for the Ribeira Valley. The frosts are common, especially in higher areas with altitude of 800 metres (2,600 ft).

People of Italian descent predominate in many towns, including the capital city, where 65 percent of the population has at least one Italian ancestor. The Italians mostly came from Veneto and Campania.

Portuguese and Spanish descendants predominate in most towns. Most of the Portuguese immigrants and settlers came from the Entre-Douro-e-Minho Province in northern Portugal, the Spanish immigrants mostly came from Galicia and Andalusia. 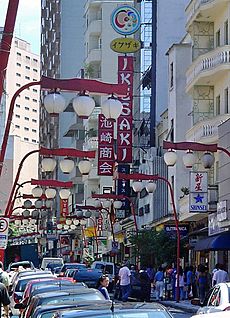 Liberdade district is a Little Tokyo of São Paulo city.

People of African or Mixed background are relatively numerous. São Paulo is also home to the largest Asian population in Brazil, as well to the largest Japanese community outside Japan itself.

There are many people of Levantine descent, mostly Syrian and Lebanese. The majority of Brazilian Jews live in the state, especially in the capital city but there are also communities in Greater São Paulo, Santos, Guarujá, Campinas, Valinhos, Vinhedo, São José dos Campos, Ribeirão Preto, Sorocaba and Itu. 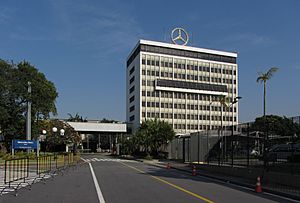 Headquarters of Mercedes-Benz Brazil in São Bernardo do Campo 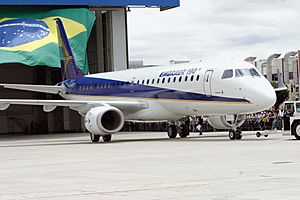 In 2009 the service sector was the largest component of GDP at 69%, followed by the industrial sector at 31%. Agriculture represents 2% of GDP. The state produces 34% of Brazilian goods and services. São Paulo (state) exports: vehicles 17%, airplanes and helicopters 12%, food industry 10%, sugar and alcohol fuel 8%, orange juice 5%, telecommunications 4% (2002).

São Paulo state is responsible for approximately a third of Brazilian GDP. The state's GDP (PPP) consists of 1,003 trillion dollars, making it also the biggest economy of South America and one of the biggest economies in Latin America, second after Mexico. Its economy is based on machinery, the automobile and aviation industries, services, financial companies, commerce, textiles, orange growing, sugar cane and coffee bean production.

São Paulo, one of the largest economic poles in Latin/South America, has a diversified economy. Some of the largest industries are metal-mechanics, sugar cane, textile and car and aviation manufacturing. Service and financial sectors, as well as the cultivation of oranges, cane sugar and coffee form the basis of an economy which accounts for 34% of Brazil's GDP (equivalent to $727.053 billion).

The towns of Campinas, Ribeirão Preto, Bauru, São José do Rio Preto, Piracicaba, Jaú, Marilia, Botucatu, Assis, and Ourinhos are important university, engineering, agricultural, zootechnique, technology, or health sciences centers. The Instituto Butantan in São Paulo is a herpetology serpentary science center that collects snakes and other poisonous animals, as it produces venom antidotes. The Instituto Pasteur produces medical vaccines. The state is also at the vanguard of ethanol production, soybeans, aircraft construction in São José dos Campos, and its rivers have been important in generating electricity through its hydroelectric plants.

Moreover, São Paulo is one of the world's most important sources of beans, rice, orange and other fruit, coffee, sugar cane, alcohol, flowers and vegetables, maize, cattle, swine, milk, cheese, wine, and oil producers. Textile and manufacturing centers such as Rua José Paulino and 25 de Marco in São Paulo city is a magnet for retail shopping and shipping that attracts customers from the whole country and as far as Cape Verde and Angola in Africa. 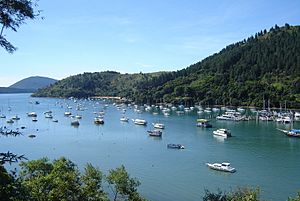 Ubatuba, part of the Green Coast. 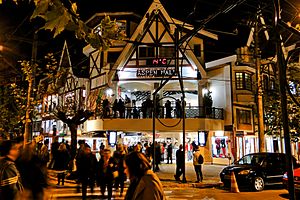 A shopping mall in a Swiss-inspired style, in Campos do Jordão.

A significant portion of the state economy is tourism. Besides being a financial center, the state also offers a huge variety of tourist destinations:

São Paulo, the state capital city is the center of business tourism in Brazil, which gives the city about 45,000 events per year. São Paulo also has the largest hotel network in Brazil. Because of real estate speculation in the mid-1990s, nowadays there is an excess supply in the number of vacancies. The city also has demand in gastronomic culinary tourism after receiving the title of the "World Capital of Gastronomy. Cultural tourism is also highlighted given the amount of museums, theaters and events like the Biennale and the Biennale of Arts of the Book.

The coast of São Paulo state along the South Atlantic Ocean has 622 km of beaches of all kinds and sizes. Among the cities that receive the most tourists in the summer are Santos, Praia Grande, Ubatuba, São Sebastião, among others.

In the interior, it is possible to find resorts, rural tourism, eco-municipalities with a European- like climate, waterfalls, caves, rivers, mountains, spas, parks, historical buildings from the 16th, 17th and 18th centuries, and Jesuit / Roman Catholic church architecture archaeological sites such as the Alto Ribeira Tourist State Park (PETAR).

Those looking for intense entertainment can browse the Hopi Hari, a major theme park in Brazil, in the Metropolitan Region of Campinas; the complex also includes a hotel and the water park Wet 'n Wild. Also you can find the Parque Aquático Thermas dos Laranjais, which is the most visited water park in Latin America and the fifth in the world, located in Olímpia, a municipality in the northern part of the state. In terms of ecotourism, Sprout Juquitiba has a fine infrastructure. In winter, the city of Campos do Jordão emerges as the main tourist reference state, with the Winter Festival and several other attractions in an environment where the temperature can drop down below 0 (zero) degrees (Celsius).

São Paulo is the state in Brazil with the largest and most efficient transportation system.

Air traffic is the busiest of all Brazil.

Harbors along the state's ocean front receive and ship a great share of Brazil's export and import goods. 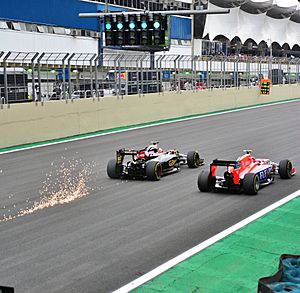 São Paulo is a vibrant place when it comes to sports. Football (soccer) is king but the state has human resources and facilities to produce some of the best athletes in the world in many other fields.

The state has many professional soccer clubs but also volleyball has found a niche here.

Auto racing is a staple of the paulista's way of life. The state has produced several racing drivers that have attained international fame.

All content from Kiddle encyclopedia articles (including the article images and facts) can be freely used under Attribution-ShareAlike license, unless stated otherwise. Cite this article:
São Paulo (state) Facts for Kids. Kiddle Encyclopedia.