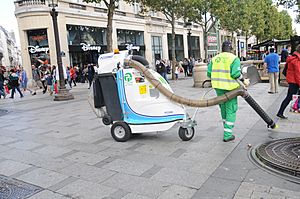 Cleaning a street in Paris

The Service Sector, also called tertiary sector, is the third of the three traditional economic sectors. The other two are the primary sector, which covers areas such as farming, mining and fishing; and the secondary sector which covers manufacturing and making things. The service sector provides services, rather than producing material commodities. Activities in the service sector include retail, banks, hotels, real estate, education, health, social work, computer services, recreation, media, communications, electricity, gas and water supply. 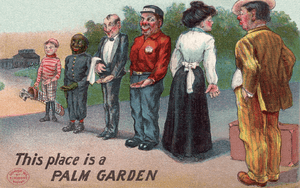 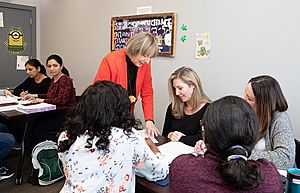 Many sector businesses focus on what is called the “knowledge economy”. They need to keep ahead of other businesses by understanding what their customers want and being ready to give it to them quickly and at low cost.

One good example of this are banks which went through big changes in the late 20th century. Using information and communication technology, banks have vastly reduced the number of people they need to employ, and lowered the cost of providing bank service. For example, an automated teller machine is able to provide basic banking services 24 hours a day, 7 days a week, in many different places. Before this, banking services were only available from the bank when it was open. Many banks and building societies have joined together to form much lower cost businesses that can make more money from a wider customer base. The key to this process is gaining information about their customers and constantly coming up with new services for them.

All content from Kiddle encyclopedia articles (including the article images and facts) can be freely used under Attribution-ShareAlike license, unless stated otherwise. Cite this article:
Service sector Facts for Kids. Kiddle Encyclopedia.