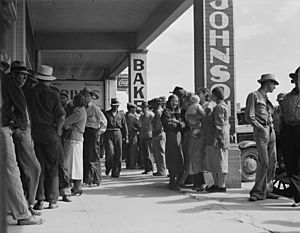 People waiting for relief checks during the Great Depression

Welfare is an idea from economics and Social Security. The idea is that everyone should have a minimal living standard. People who can not reach this standard will be supported, usually by the state. Using welfare, everyone has their basic needs covered. This idea is different from the idea of charity.

Welfare money is given by the government, charities, and other groups of people to help homeless, old, illness, poor, and disabled people (people who cannot help themselves), and also helps children (child support).

Welfare can also be called the well-being of someone or a group of people: their happiness, health, safety, and fortune.

In countries like Germany, Japan, United States, Sweden, and France, government welfare also is used to help the needy.

All content from Kiddle encyclopedia articles (including the article images and facts) can be freely used under Attribution-ShareAlike license, unless stated otherwise. Cite this article:
Welfare Facts for Kids. Kiddle Encyclopedia.