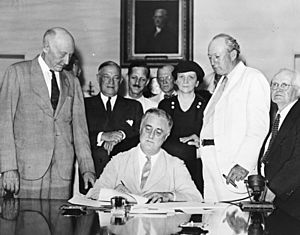 The Social Security Act of 1935 is a law enacted by the 74th United States Congress and signed into law by President Franklin D. Roosevelt. The law created the Social Security program as well as insurance against unemployment. The law was part of Roosevelt's New Deal domestic program.

All content from Kiddle encyclopedia articles (including the article images and facts) can be freely used under Attribution-ShareAlike license, unless stated otherwise. Cite this article:
Social Security Act Facts for Kids. Kiddle Encyclopedia.