Right to an adequate standard of living facts for kids 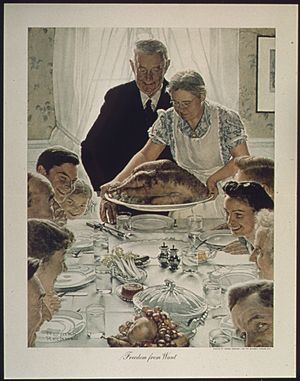 Freedom from Want of painter Norman Rockwell of 1943

The right to an adequate standard of living is a fundamental human right. It is part of the Universal Declaration of Human Rights that was accepted by the General Assembly of the United Nations on December 10, 1948.

Everyone has the right to a standard of living adequate for the health and well-being of himself and of his family, including food, clothing, housing and medical care and necessary social services, and the right to security in the event of unemployment, sickness, disability, widowhood, old age or other lack of livelihood in circumstances beyond his control.

—Article 25.1 of the Universal Declaration of Human Rights

Furthermore it has been written down in article 11 of the International Covenant on Economic, Social and Cultural Rights, which is a human righs treaty of the United Nations as well.

The predecessor of this right, the Freedom from Want, is one of the Four Freedoms that American President Franklin D. Roosevelt spoke out at his State of the Union of January 6, 1941. According to Roosevelt it is a right every human being everywhere in the world should have. In his speech Roosevelt described his third right as follows:

The third is freedom from want which, translated into world terms, means economic understandings which will secure to every nation a healthy peacetime life for its inhabitants, everywhere in the world.

All content from Kiddle encyclopedia articles (including the article images and facts) can be freely used under Attribution-ShareAlike license, unless stated otherwise. Cite this article:
Right to an adequate standard of living Facts for Kids. Kiddle Encyclopedia.