State of the Union facts for kids 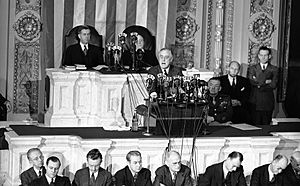 President Franklin D. Roosevelt giving his State of the Union address on Capitol Hill in Washington on Jan. 7, 1943.

The address fulfills the requirement in Article II, Section 3, Clause 1 of the U.S. Constitution for the President to periodically "give to the Congress Information of the State of the Union, and recommend to their Consideration such measures as he shall judge necessary and expedient." The date of the event may be rescheduled. During most of the country's first century, the President primarily only submitted a written report to Congress. After 1913, Woodrow Wilson, the 28th U.S. President, began the regular practice of delivering the address to Congress in person as a way to rally support for the President's agenda. With the advent of radio and television, the address is now broadcast live across the country on many networks.

All content from Kiddle encyclopedia articles (including the article images and facts) can be freely used under Attribution-ShareAlike license, unless stated otherwise. Cite this article:
State of the Union Facts for Kids. Kiddle Encyclopedia.