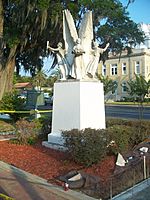 The Four Freedoms is an important concept of American president Franklin D. Roosevelt. He presented them in the State of the Union of January 6, 1941, which is therefore also called the Four Freedoms Speech.

"In the future days, which we seek to make secure, we look forward to a world founded upon four essential human freedoms:

"That is no vision of a distant millennium. It is a definite basis for a kind of world attainable in our own time and generation. That kind of world is the very antithesis of the so-called new order of tyranny which the dictators seek to create with the crash of a bomb". Franklin D. Roosevelt, January 6, 1941

To inspire a greater public for his concept, Roosevelt arranged the creation of the Four Freedoms Monument. The statue was made public in 1943 in New York City. In honor of one of the first Americans to be killed in action, Colin Kelly, Roosevelt had the statue moved to his former home in Florida.

In 1943 artist painter Norman Rockwell got inspired by the Four Freedoms and made a series of four paintings on this subject. Afterwards, the American authorities made use of these paintings to collect money for the world war.

All content from Kiddle encyclopedia articles (including the article images and facts) can be freely used under Attribution-ShareAlike license, unless stated otherwise. Cite this article:
Four Freedoms Facts for Kids. Kiddle Encyclopedia.