Monroe was born in Virginia. His father died at age 16. At age 18, he joined the Continental Army. He later studied law with Thomas Jefferson. Created the Monroe Doctrine and was included in the Louisiana Purchase. Many cities have been named Monroe.

He married Elizabeth Kotright in 1789. 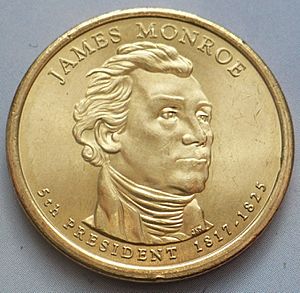 Monroe was president from 1817 to 1825. With his Secretary of State John Quincy Adams, Monroe got Spain to give the United States Florida. Monroe and Adams also created the Monroe Doctrine, which was a policy that said that the United States did not want Europe to be involved in the Western Hemisphere anymore.

Monroe retired to Virginia. After his wife's death he moved to New York where he died on July 4, 1831.

All content from Kiddle encyclopedia articles (including the article images and facts) can be freely used under Attribution-ShareAlike license, unless stated otherwise. Cite this article:
James Monroe Facts for Kids. Kiddle Encyclopedia.