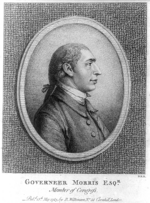 Gouverneur Morris (January 31, 1752 – November 6, 1816) was an American politician and diplomat from New York City. Morris was born and died in Morrisiana, which is now part of The Bronx. He went to college at King's College, New York. He was a delegate to the Continental Congress from New York in the 1770s. In the 1780s, he moved to Philadelphia and was the assistant superintendent of finance. He was also a delegate to the Constitutional Convention from Pennsylvania. He was very active there, giving 173 speeches. This was more speeches than any other person gave. Morris wrote the Preamble and many of the sections of the Constitution. Later, he served as ambassador to France from 1792 to 1794. He was a U.S. Senator from 1800 to 1803.

Late in life, Morris was head of the group building the Erie Canal. He wanted a strong central government, and wanted people to think of themselves mostly as Americans rather than people of the state they lived in. Morris also spoke out against slavery. He had a wooden leg. It was thought that Morris lost his leg due to falling out of a window after having an affair. He is also noted for keeping a diary of his life.

All content from Kiddle encyclopedia articles (including the article images and facts) can be freely used under Attribution-ShareAlike license, unless stated otherwise. Cite this article:
Gouverneur Morris Facts for Kids. Kiddle Encyclopedia.