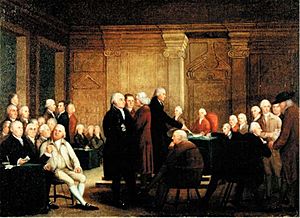 The Continental Congress was a meeting of delegates from the thirteen original colonies. Delegates are people that are chosen by the citizens to speak on their behalf in important meetings. These delegates made decisions for the people of the colonies during the American Revolution.

The First Continental Congress was a group of fifty-six men from twelve of the thirteen colonies that would eventually become the United States of America. Only the delegates from Georgia were unable to attend this first group of meetings, which lasted almost two months. They met in Carpenter’s Hall in Philadelphia, Pennsylvania, from September 5 to October 26, 1774. Ben Franklin had tried to convince the delegates to meet earlier, but some were not ready yet. Some famous men who were elected by their colonies to represent them in the First Continental Congress were George Washington, Patrick Henry, John Adams, Samuel Adams, Joseph Galloway, and John Dickinson.

Before the last meeting of the First Continental Congress in October, the delegates decided that if the king did not meet their demands, they would meet again in May of 1775. King George did not respond in a way the colonies had hoped he would, and the American Revolutionary War began in April.

The Second Continental Congress first met on May 10, 1775. One of their first orders of business was to establish George Washington as the General of the Continental Army. The colonies needed organized soldiers if they were going to fight the British.

Meanwhile, in an effort reconcile with the king, the delegates wrote a petition to King George III on July 8, 1775, asking him to speak to Parliament on their behalf. King George refused to see the man who brought the petition and on August 23, he proclaimed that the colonies were rebelling against Great Britain.

The king’s proclamation forced the colonies further into war. The delegates began writing the Declaration of Independence from Great Britain, which was issued on July 4, 1776. The thirteen colonies were on their way to becoming an independent nation.

All content from Kiddle encyclopedia articles (including the article images and facts) can be freely used under Attribution-ShareAlike license, unless stated otherwise. Cite this article:
Continental Congress Facts for Kids. Kiddle Encyclopedia.