Common Sense is a pamphlet written by Thomas Paine in 1775–76 advocating independence from Great Britain to people in the Thirteen Colonies. Written in clear and persuasive prose, Paine marshaled moral and political arguments to encourage common people in the Colonies to fight for egalitarian government. It was published anonymously on January 10, 1776, at the beginning of the American Revolution, and became an immediate sensation. 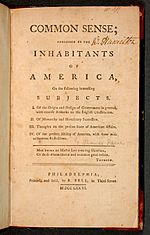 It was sold and distributed widely and read aloud at taverns and meeting places. In proportion to the population of the colonies at that time (2.5 million), it had the largest sale and circulation of any book published in American history. As of 2006, it remains the all-time best selling American title, and is still in print today.

The pamphlet was one of the bestselling works of the 18th century in America. Thomas Paine wrote in a style that was easy for most people to understand, instead of the hard to understand writing common in the Enlightenment Era. He also referenced the Bible and used idioms that many of the Protestant colonists understood. 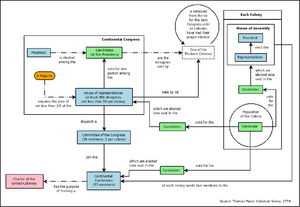 It led to the declaration of independence written by Thomas Jefferson.

All content from Kiddle encyclopedia articles (including the article images and facts) can be freely used under Attribution-ShareAlike license, unless stated otherwise. Cite this article:
Common Sense (pamphlet) Facts for Kids. Kiddle Encyclopedia.