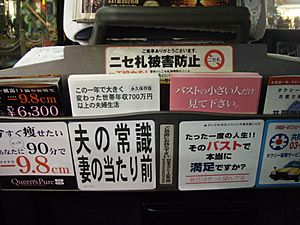 Pamphlets in a Japanese Taxi

A pamphlet is a small book without a hard cover or binding. It can be made up of a single sheet of paper that is printed on both sides and folded in half, in thirds, or in fourths (called a leaflet).

It can also be made up of a few pages that are folded in half and stapled at the crease to make a simple book. In order to count as a pamphlet, UNESCO requires the pamphlet to have 'at least 5 but not more than 48 pages' not including the cover page; a longer item is a book.

Pamphlets can contain anything, such as user instructions information for kitchen appliances, or religious and political ideas. Pamphlets have been important in history, publishing a lot of pamphlets can help spread ideas, for instance during revolutions pamphlets were used to influence people. Pamphlets are also important in advertising as they are cheap to produce and can be distributed easily to customers.

All content from Kiddle encyclopedia articles (including the article images and facts) can be freely used under Attribution-ShareAlike license, unless stated otherwise. Cite this article:
Pamphlet Facts for Kids. Kiddle Encyclopedia.