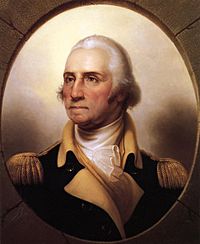 General George Washington, was appointed Commander-in-Chief of the Continental Army on June 15, 1775 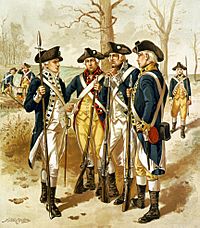 On June 7 the Continental Congress decided to proceed with the establishment of a Continental Army for purposes of comon defense. Referring to themselves as "the twelve United Colonies", (Georgia was not yet represented), the congress adopted forces already in place in Cambridge, Massachusetts as the first units of the Continental Army. They then elected, by unanimous vote, George Washington, on June 15, as commander-in-chief. Washington accepted the position without any compensation, except reimbursement of his expenses.

As the Continental Congress increasingly accepted the responsibilities and posture of a legislature for a sovereign state, the role of the Continental Army was the subject of considerable debate. There was a general aversion to maintaining a standing army among the Americans; but, on the other hand, the requirements of the war against the British required the discipline and organization of a modern military. As a result, the army went through several distinct phases, characterized by official dissolution and reorganization of units.

In addition, a number of militia units, raised and funded by individual colonies/states, participated in battles.

The financial responsibility for providing pay, food, shelter, clothing, arms, and other equipment to specific units was assigned to states as part of the establishment of these units. States differed in how well they lived up these obligations. There were constant funding issues on the one hand and morale problems on the other as the war continued.

The emergence of combat capabilities 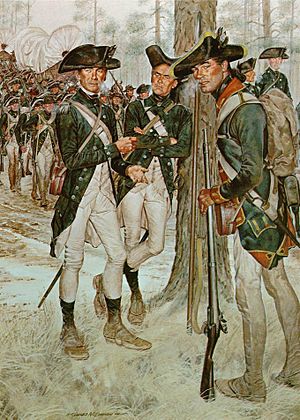 Under the command of Artemas Ward, the army at Cambridge in June of 1775 numbered about sixteen thousand men from New England. In addition to Ward, John Thomas acted as executive officer, Richard Gridley commanded the artillery corps and was chief engineer.

The British force in Boston was increasing by fresh arrivals. It numbered then about ten thousand men. Maj. Generals Howe, Clinton, and Burgoyne had arrived late in May, and joined General Gage in forming and executing plans for dispersing the rebels. Feeling strong with these veteran officers and soldiers around him, and the presence of several ships-of-war under Admiral Graves, the governor issued a proclamation, declaring martial law, branding the entire Continental Army and supporters as "rebels" and "parricides of the Constitution." Amnesty was offered to those who gave up their allegiance to the Continental Army and Congress in favor of the British authorities, though Samuel Adams and John Hancock were still wanted for high treason. This proclamation only served to strengthen the resolve of the congress and army.

Throughout its existence, the army was troubled by poor logistics, spotty training, short-term enlistments, interstate rivalries, and Congress's inability to compel the states to provide food, money or supplies. In the beginning, soldiers enlisted for a year, largely motivated by patriotism; but as the war dragged on, bounties and other incentives became more commonplace. Two major mutinies diminished drastically two of the main units, and there were constant discipline problems.

The army increased its effectiveness and success rate through a series of trials and errors, often at great human cost. General Washington, along with other distinguished officers, were instrumental leaders in preserving unity, learning and adapting, and ensuring discipline throughout the eight years of war. Washington always viewed the army as a temporary measure and strove to maintain civilian control of the military.

Washington resigned his post when the Treaty of Paris was signed with the British in 1783, ending the war and confirming American independence. His willing yielding of power, at a time when many would have given him a crown, was crucial in averting a military dictatorship in the United States, and helped ensure that democracy would take root.

All content from Kiddle encyclopedia articles (including the article images and facts) can be freely used under Attribution-ShareAlike license, unless stated otherwise. Cite this article:
Continental Army Facts for Kids. Kiddle Encyclopedia.