The Battle of Long Island was a major battle in the American war of independence. The battle which was fought on August 27, 1776, was a major victory for the British and defeat for the Americans under General George Washington. It was the start of a successful British campaign that gave the British control of the strategically important city of New York. In the American Revolutionary War it was the first major battle to take place after the United States declared independence in July, 1776. In terms of soldiers, it was the largest battle of the entire conflict.

General George Washington, Commander-in-Chief had defeated the British in the Siege of Boston on March 17, 1776. Washington then used the Continental Army to defend the port city of New York. At that time, New York City was only at the southern end of Manhattan Island. Washington understood that the city's harbor would provide an excellent base for the British Navy during the campaign. For this reason, he established defenses there and waited for the British to attack.

The British were commanded by General William Howe. In July his force landed a few miles across the harbor on sparsely-populated Staten Island. Over the next few months, new ships slowly reinforced their position in Lower New York Harbor. In August there were 32,000 soldiers, and the British controlled the entrance of the harbor at The Narrows. Washington knew that it would be difficult to hold the city against such a force. He believed Manhattan would be the first target and he moved most of his forces there. 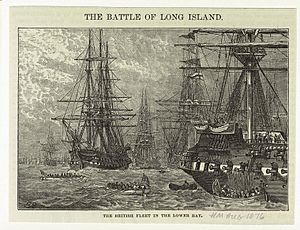 On August 22, the British landed on the shores of Gravesend Bay in southwest Kings County, across The Narrows from Staten Island, more than 12 miles (20 km) south from the East River crossings to Manhattan. Washington brought some of his troops to northern Kings County, expecting to fight only part of the attacking army.

After five days of waiting, the British attacked American defenses. Unknown to the Americans, however, Howe had brought his main army around their rear and attacked their flank soon after. The Americans panicked, although a stand by 400 Maryland troops prevented most of the army from being captured. The remainder of the army fled to the main defenses on Brooklyn Heights. 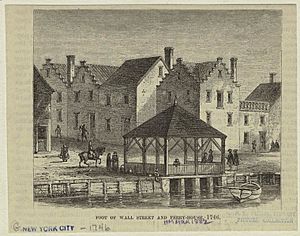 The Foot of Wall Street And Ferry House – 1746. The Manhattan side of the East River crossing, known then as the Brooklyn Ferry, as it looked in the mid-1700s.

The British dug in for a siege but, on the night of August 29–30, Washington evacuated the entire army to Manhattan without the loss of materiel or a single life. Washington and the Continental Army were driven out of New York entirely after the battle of Fort Washington and other defeats, and forced to retreat through New Jersey and into Pennsylvania. All 9,000 troops had been evacuated with no loss of life. 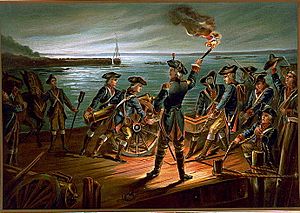 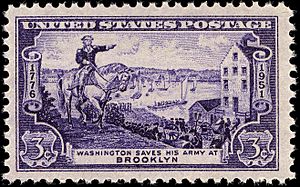 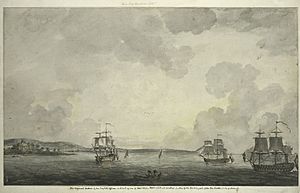 The British fleet in New York Harbor just after the battle

The British were stunned to find that Washington and the army had escaped. Later in the day, August 30, the British troops occupied the American fortifications. When news of the battle reached London, it caused many festivities to take place. Bells were rung across the city, candles were lit in windows and King George III gave Howe the Order of the Bath.

Washington's defeat revealed his deficiencies as a strategist who split his forces however, his daring nighttime retreat has been seen by some historians as one of his greatest military feats. 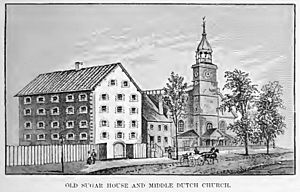 If the Royal Navy is included, over 40,000 men took part in the battle. Howe reported his losses as 59 killed, 268 wounded and 31 missing. The Hessian casualties were 5 killed and 26 wounded. The Americans suffered much heavier losses. About 300 had been killed and over 1,000 captured. As few as half of the prisoners survived. Kept on prison ships in Wallabout Bay, then transferred to locations such as the Middle Dutch Church, they were starved and denied medical attention. In their weakened condition, many succumbed to smallpox.

Historians believe that as many as 256 soldiers of the First Maryland Regiment under Colonel William Smallwood fell in the battle, about two-thirds of the regiment. It is known that they were buried in a mass-grave, but the grave's exact location has been a mystery for 240 years.

The most significant legacy of the Battle of Long Island was that it showed there would be no easy victory, and that the war would be long and bloody.

Commemorations of the battle include:

There are only thirty currently existing units in the U.S. Army with lineages that go back to the colonial and revolutionary eras. Five Army National Guard units (101st Eng Bn, 125th MP Co, 175th Inf, 181st Inf and 198th Sig Bn) and one Regular Army Field Artillery battalion (1–5th FA) are derived from American units that participated in the Battle of Long Island.

Interesting facts about the Battle of Long Island

All content from Kiddle encyclopedia articles (including the article images and facts) can be freely used under Attribution-ShareAlike license, unless stated otherwise. Cite this article:
Battle of Long Island Facts for Kids. Kiddle Encyclopedia.