Flatbush is a neighborhood in the New York City borough of Brooklyn. Founded in 1651 by Dutch colonists, the neighborhood, which consists of several subsections, had a population of 110,875 as of the 2010 United States Census. By the 2010s, the area was quickly gentrifying.

Flatbush was a town prior to being incorporated into the City of Brooklyn, and its former border runs through the Brooklyn Botanic Garden. Generally, the township was larger than what is considered Flatbush today by the residents of Brooklyn. The modern neighborhood includes or borders several institutions of note, including Prospect Park and Brooklyn College.

The name Flatbush is a calque of the Dutch language Vlacke bos (vlacke or vlak, meaning "flat"; "Flatbush" meaning "flat woodland" or "wooded plain"), so named from woods that grew on the flat country.

Flatbush was originally chartered as the Dutch Nieuw Nederland colony town of Midwout in 1651. Both names were used in the Dutch era, and Midwood was an alternative name for Flatbush into the early 20th century. In a reversal, Midwood, now the area immediately south of Brooklyn College, is often alternatively called "Flatbush," especially among Orthodox Jews. Midwood's residents predominately feature a mix of the latter and Irish Americans.

Flatbush and the five other towns of what was to become Kings County, were surrendered to the English in 1664. The town was the county seat for Kings County and was a center of life for what is now called Brooklyn. The compact center of the village of Flatbush was at the intersection of what are now Flatbush and Church avenues, where we still find an old Dutch Reformed Church and Erasmus Hall, the oldest high school in New York City.

Flatbush played a key role in the American Revolution. Flatbush was where significant skirmishes and battles of the Battle of Long Island took place. As Kings County was settled largely by the Dutch, and as the Dutch were prominent in the slave trade, the area was somewhat sympathetic to the British side of the American Revolutionary War at the beginning of the conflict. Kings County at the time had the highest concentration of slaves north of the Mason–Dixon line – almost one-third of the total population for the county were slaves. When a Loyalist Governor of Virginia supported freedom for slaves who supported and fought on the British side, landowners in Brooklyn were concerned that a full conflict between the Colonies and the British would result in loss of their critical source of labor. Loyalist residents of Flatbush included David Mathews, Mayor of New York City, who lived at what is now the intersection of Flatbush and Parkside avenues. Flatbush residents maintained their loyalist sympathies: the King's Arms, for example, appeared in the town's inn for a half-century after the conclusion of the conflict.

The influence of Dutch merchant and farming families remained strong in the area until after consolidation into the City of Greater New York in 1898, after which the development of Flatbush as a suburb, and then an integral part of the larger city, proceeded apace.

Before it was incorporated into the City of Brooklyn in 1894, Flatbush described both the Town of Flatbush, incorporating a large swath of central Kings County extending east to the Queens County border, and the Village of Flatbush, formerly the heart of the current community. Many of the remaining early Dutch structures are in the Flatlands and Marine Park neighborhoods. 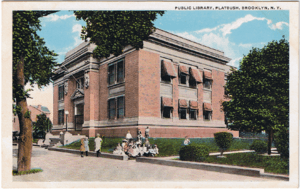 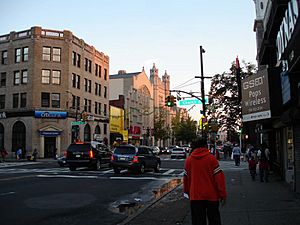 Flatbush maintained a kind of distance from the rest of Brooklyn and New York, but the emergence of the subway in the 1920s connected it to surrounding areas in an unprecedented way.

In the first half of the 20th century, Flatbush had a sizable population of Irish-Americans, Italian-Americans and Jews. Much as it is today, it was a working-class neighborhood. A significant portion of Flatbush residents closely followed the Brooklyn Dodgers, which at the time were not only the team of Brooklyn but also of Flatbush in particular. Dodgers centerfielder Duke Snider was known as “the Duke of Flatbush”. By 1958, however, the Dodgers left Brooklyn, and Ebbets Field eventually was torn down. Due to shifting neighborhood boundaries, Ebbets Field today technically would be in Crown Heights, as the ballpark was located just north of Empire Boulevard.

During the 1970s and early 1980s, Flatbush experienced a shift in demographics as it went from being a mostly Irish, Italian and Jewish community to a mostly Caribbean community. While most sections of Flatbush were working class before the demographic shift, there were a few affluent areas. Prospect Park South had a sizable number of more affluent homeowners, and more than a few doctors resided on a stretch of Parkside Avenue immediately adjacent to Prospect Park. By the mid-1980s, however, there were a number of abandoned or semi-abandoned buildings in the community, with a number of apartment houses falling into a state of disrepair. While crime generally had always been a problem in the community it was particularly bad during the 1970s, '80s and '90s. A number of stores on Flatbush and Church Avenues had been looted during the 1977 blackout, and a drug epidemic ravaged Flatbush during the 1980s and early 1990s.

In February 2016, Flatbush was one of four neighborhoods featured in an article in The New York Times about "New York’s Next Hot Neighborhoods". 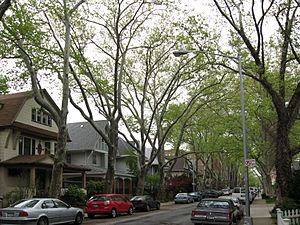 The Flatbush Post Office is assigned ZIP code 11226, but the area understood as included in Flatbush extends into other postal zones, including 11210 and 11230. Except for the 2010 total, the following are U.S. Census Bureau figures for the principal ZIP code area of Flatbush, 11226. They exclude the portions of Flatbush that extend into other ZIP code areas.

While the Flatbush ZIP code of 11226 is today is predominantly African American and West Indian, there are sizable numbers of Caucasians, Latinos and Indian Americans living within its borders. A majority of residents are working class, but there also are middle-class and wealthier residents who call Flatbush home. The primary commercial strips are Flatbush, Church, and Nostrand Avenues, with Coney Island Avenue also emerging as a major strip. One can find Caribbean food, Soul food, Chinese, Mexican and South Asian restaurants. Most of the businesses are small, with some larger businesses also present. Flatbush housing varies in character. It generally features apartment buildings, though some rowhouses also are present. Older, Victorian-style housing can be found in Prospect Park South, and brownstones are in Prospect Lefferts Gardens.

In 2010 the population of Flatbush, regardless of ZIP code, was 110,875. The Flatbush community has been receiving an influx of immigrants from the Caribbean, mostly from Guyana, Haiti, Trinidad and Tobago, Jamaica, Grenada, Barbados, Saint Lucia, Saint Vincent and the Grenadines, Dominica, Antigua and Barbuda, Saint Kitts and Nevis and Belize, since the 1980s, as well as immigrants from South Asia, primarily India, Pakistan and Bangladesh and African countries like Ghana, Zimbabwe, Nigeria, and Kenya. Haitians are the largest ethnic group in Flatbush. Prior to the arrival of these groups, the Flatbush community had already been diverse, with many Italian-Americans, Irish-Americans, African-Americans and Jewish-Americans. Flatbush is patrolled by the NYPD's 67th and 70th Precincts.

The former town of Flatbush coincided roughly with Brooklyn Community Board 14, which runs north-south from Prospect Park to Kings Highway. The boundaries of the neighborhood today are not precisely defined.

The neighborhoods of Flatbush extend south from the old Brooklyn City Line north of the southern edges of Prospect Park, the Brooklyn Botanic Garden and Empire Boulevard. The southern border of Flatbush neighborhoods is approximately on the line of the Long Island Rail Road's Bay Ridge Branch, which runs to the south of Avenue H, the campus of Brooklyn College, and "The Junction" where Flatbush and Nostrand Avenues intersect. Flatbush's eastern border is roughly around New York Avenue, while its western border is Coney Island Avenue.

Neighborhoods within Flatbush include the planned communities of Prospect Park South, the Beverley Squares (Beverley Square East and Beverley Square West), Prospect Lefferts Gardens, Ditmas Park, Fiske Terrace, Victorian Flatbush, and Albemarle-Kenmore Terrace. Bordering Flatbush on the north are the community of Crown Heights and the former neighborhood of Pigtown. On the east, within the old town of Flatbush, is East Flatbush, on the west are Kensington and Parkville (formerly Greenfield), and on the south is Midwood. Many consider Midwood to be a part of Flatbush, but historically it was part of the neighboring former towns of New Utrecht, Gravesend and Flatlands. 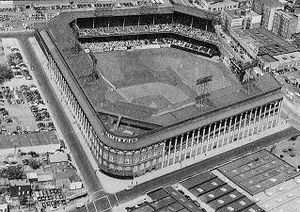 An aerial view of Ebbets Field

Well-known institutions within Flatbush include Erasmus Hall High School, the Parade Grounds, the Flatbush Dutch Reformed Church, Brooklyn College, and Ebbets Field (demolished in 1960), the last Brooklyn home of the Brooklyn Dodgers baseball team. Due to imprecisely defined, shifting boundaries, the Ebbets Field site would be considered today by some to be in Crown Heights.

The Kings Theatre originally opened in 1929. It was closed and vacated in 1977, but reopened as a live show venue in February 2015 after extensive renovations.

The bustling business district and neighborhoods of Flatbush are supported by several important community organizations. The Flatbush Avenue Business Improvement District provides services to keep Flatbush Avenue from Parkside Avenue to Cortelyou Road clean, safe and profitable for its businesses. Every year, the Flatbush BID organizes the Flatbush Avenue Street Fair, an event that celebrates the cultures of the community. The Flatbush Development Corporation (FDC) is a nonprofit that hosts events and programs that are aimed to support the "vitality, diversity and quality of life" in the Flatbush community. CAMBA, Inc. is a Flatbush-based nonprofit that since 1977 has provided housing, youth education and development, legal services and healthcare services to residents of Flatbush and beyond. 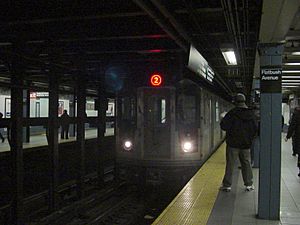 Flatbush is well served by public transportation. On the New York City Subway, the BMT Brighton Line (B and ​Q train) has a number of stops within the community. The stretch of stations from Prospect Park to Avenue H is in Flatbush. All stations of the IRT Nostrand Avenue Line (2 and ​5 train) except President Street are also within Flatbush. The terminal Flatbush Avenue – Brooklyn College station is about one block north of Brooklyn College and one block north of the Junction Mall.

The B6, B8, B35, B41, B44, B49, Q35 are MTA Regional Bus Operations routes that serve the neighborhood; some of them also have limited-stop variants. In addition, the B103, a wholly limited-stop bus, runs through Flatbush.

The major roadways through Flatbush include Flatbush Avenue, Ocean Avenue and Ocean Parkway, which are North-South corridors, and Kings Highway, Church Avenue and Caton Avenue, which are East-West corridors.

All content from Kiddle encyclopedia articles (including the article images and facts) can be freely used under Attribution-ShareAlike license, unless stated otherwise. Cite this article:
Flatbush, Brooklyn Facts for Kids. Kiddle Encyclopedia.