Joseph Roland Barbera (March 24, 1911 – December 18, 2006) was an American animator, director, producer, storyboard artist, and cartoon artist, whose film and television cartoon characters entertained millions of fans worldwide for much of the 20th century.

He was born to Italian immigrants in New York City, where he lived, attended college, and began his career through his young adult years. After working odd jobs and as a banker, Barbera joined Van Beuren Studios in 1932 and subsequently Terrytoons in 1936. In 1937, he moved to California and while working at Metro-Goldwyn-Mayer (MGM), Barbera met William Hanna. The two men began a collaboration that was at first best known for producing Tom and Jerry.

In 1957, after MGM dissolved their animation department, they co-founded Hanna-Barbera, which became the most successful television animation studio in the business, producing programs such as The Flintstones, Yogi Bear, Scooby-Doo, Top Cat, The Smurfs, Huckleberry Hound and The Jetsons.

Hanna and Barbera won seven Academy Awards and eight Emmy Awards. Their cartoon shows have become cultural icons, and their cartoon characters have appeared in other media such as films, books, and toys. Hanna-Barbera's shows had a worldwide audience of over 300 million people in the 1960s and have been translated into more than 20 languages. 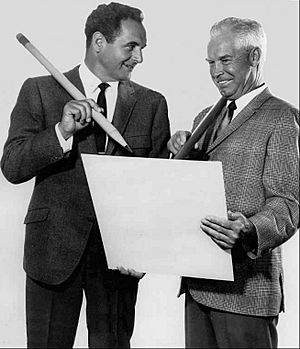 Barbera died at age 95 at his home in Studio City, Los Angeles on December 18, 2006, ending a 70-year career in animation. His wife Sheila was at his side. He was buried in a private section of the Great Mausoleum in Glendale's Forest Lawn Memorial Park on January 1, 2007.

Most of the cartoons Barbera and Hanna created revolved around close friendship or partnership; this theme is evident with Fred and Barney, Tom and Jerry, Scooby and Shaggy, The Jetson family and Yogi & Boo-Boo. These may have been a reflection of the close business friendship and partnership that Barbera and Hanna shared for over 60 years. Professionally, they balanced each other's strengths and weaknesses very well, but Barbera and Hanna travelled in completely different social circles.

Barbera and Hanna were also among the first animators to realize the enormous potential of television. Leonard Maltin says the Hanna–Barbera team "held a record for producing consistently superior cartoons using the same characters year after year—without a break or change in routine their characters are not only animated superstars, but also a very beloved part of American pop culture". They are often considered Walt Disney's only rivals in cartoon animation.

Barbera and Hanna had a lasting impact on television animation. Cartoons they created often make greatest lists. The works of Barbera and Hanna have been praised not only for their animation, but for their music. The Cat Concerto (1946) and Johann Mouse (1952) have both been called "masterpieces of animation" largely because of their classical music.

In all, the Hanna–Barbera team won seven Academy Awards and eight Emmy Awards, including the 1960 award for The Huckleberry Hound Show, which was the first Emmy awarded to an animated series.

In 1992, Barbera met with pop musician Michael Jackson, an avid cartoon fan. Barbera drew five quick sketches of Tom and Jerry for Jackson and autographed them. Jackson autographed a picture of himself for Barbera with the words: "To my hero of yesterday, today, and tomorrow, with many thanks for all the many cartoon friends you gave me as a child. They were all I had. – Michael"

All content from Kiddle encyclopedia articles (including the article images and facts) can be freely used under Attribution-ShareAlike license, unless stated otherwise. Cite this article:
Joseph Barbera Facts for Kids. Kiddle Encyclopedia.