Glendale lies on the southeastern end of the San Fernando Valley, bisected by the Verdugo Mountains, and is a suburb in the Greater Los Angeles Area. The city is bordered to the northwest by the Sun Valley and Tujunga neighborhoods of Los Angeles; to the northeast by La Cañada Flintridge and the unincorporated area of La Crescenta; to the west by Burbank and Griffith Park; to the east by Eagle Rock and Pasadena; to the south by the Atwater Village neighborhood of Los Angeles; and to the southeast by Glassell Park neighborhood of Los Angeles. The Golden State, Ventura, Glendale, and Foothill freeways run through the city.

Glendale has one of the largest communities of Armenian descent in the United States. In 2013, Glendale was named LA's Neighborhood of the Year by the readers and editors of Curbed.com.

The Glendale area in the 1870s

The area was long inhabited by the Tongva people (or "People of the Earth"), who were later renamed the Gabrieleños by the Spanish missionaries, after the nearby Mission San Gabriel Arcángel.

In 1798, José María Verdugo, a corporal in the Spanish army from Baja California, received the Rancho San Rafael from Governor Diego de Borica, formalizing his possession and use of land on which he had been grazing livestock and farming since 1784. Rancho San Rafael was a Spanish concession, of which 25 were made in California. Unlike the later Mexican land grants, the concessions were similar to grazing permits, with the title remaining with the Spanish crown.

In 1860, his grandson Teodoro Verdugo built the Verdugo Adobe, which is the oldest building in Glendale. The property is the location of the Oak of Peace, where early Californio leaders including Pio Pico met in 1847 and decided to surrender to Lieutenant Colonel John C. Frémont.

Verdugo's descendants sold the ranch in various parcels, some of which are included in present-day Atwater Village, Eagle Rock, and Highland Park neighborhoods of Los Angeles. 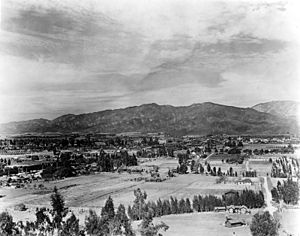 In 1884, residents gathered to form a townsite and chose the name "Glendale" (it was bounded by First Street (now Lexington Drive) on the north, Fifth Street (now Harvard Street) on the south, Central Avenue on the west, and the Childs Tract on the east). Residents to the southwest formed "Tropico" in 1887. The Pacific Electric Railway brought streetcar service in 1904.

Glendale incorporated in 1906, and annexed Tropico 12 years later. An important civic booster of the era was Leslie Coombs Brand (1859–1925), who built an estate in 1904 called El Miradero, featuring an eye-catching mansion, the architecture of which combined characteristics of Spanish, Moorish, and Indian styles, copied from the East Indian Pavilion at the 1893 World's Columbian Exposition held in Chicago, which he visited. Brand loved to fly, and built a private airstrip in 1919 and hosted "fly-in" parties, providing a direct link to the soon-to-be-built nearby Grand Central Airport. The grounds of El Miradero are now city-owned Brand Park and the mansion is the Brand Library, according to the terms of his will. Brand partnered with Henry E. Huntington to bring the Pacific Electric Railway, or the "Red Cars", to the area. Today, he is memorialized by one of the city's main thoroughfares, Brand Boulevard. 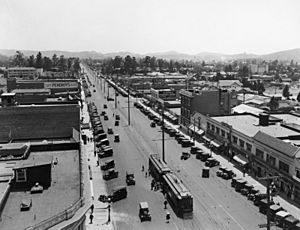 The city's population rose from 13,756 in 1920 to 62,736 in 1930. The Forest Lawn Cemetery opened in 1906 and was renamed Forest Lawn Memorial-Park in 1917. Pioneering endocrinologist and entrepreneur Henry R. Harrower opened his clinic in Glendale in 1920, which for many years was the largest business in the city. The American Green Cross, an early conservation and tree preservation society, was formed in 1926 (it disbanded three years later and the current organization of that name is unrelated). In 1964, Glendale was selected by George Lincoln Rockwell to be the West Coast headquarters of the American Nazi Party. Its offices, on Colorado Street in the downtown section of the city, remained open until the early 1980s.

Glendale from Griffith Park in the southwest, with the San Gabriel Mountains in the background and the Verdugo Hills on the extreme left

Glendale is located at the junction of two large valleys, the San Fernando and the San Gabriel. According to the United States Census Bureau, the city has a total area of 79.212 km2 (30.6 sq mi); 30.5 square miles (79 km2) of it is land and 0.13 square miles (0.34 km2) of it (0.43%) is covered by water. It is bordered to the north by the foothill communities of La Cañada Flintridge, La Crescenta, and Tujunga; to the south by the Atwater Village community incorporated by the city of Los Angeles; to the east by Pasadena and Eagle Rock (also incorporated within Los Angeles); and to the west by the city of Burbank. Glendale is located 10 miles (16 km) north of downtown Los Angeles.

Several known earthquake faults criss-cross the Glendale area and adjacent mountains, as in much of Southern California. Among the more recognized faults are the Sierra Madre and Hollywood faults, situated in the city's northern and southwestern portions, respectively. Additionally, the Verdugo and Raymond faults intersect through the city's central and southeastern areas. The San Gabriel fault, meanwhile, is located northeast of the city. Roughly 75 miles (121 km) northeast of Glendale is a major portion of the San Andreas Fault known as the "Big Bend", where quake-recurrence tracking shows major activity roughly every 140–160 years. The closest portion of the San Andreas is actually 29 miles (47 km) from Glendale. The last major quake along the southern San Andreas was recorded in 1857.

In the 1971 San Fernando earthquake, which took place along the western edge of the Sierra Madre Fault, surface ruptures were nearly 12 miles (19 km) long, including one portion a few miles northwest of Glendale. Most of the damage was in the northern San Fernando Valley, though 31 structures in Glendale suffered major damage and had to be demolished, plus numerous chimneys collapsed. The 1994 Northridge earthquake had an epicenter about 18 miles (29 km) from Glendale. The city suffered severe damage to a public parking structure and sections of the Glendale Galleria parking structures and exterior columns incurred damages.

Glendale has a Mediterranean climate (Köppen climate classification Csa). The highest recorded temperature in Glendale was 110 °F (43 °C) on several occasions. The lowest recorded temperature was 17 °F (−8 °C) in February 2003. The warmest month is August and the coolest month is January. The rainfall is highest in February and lowest in July. The hills and mountains of northern Glendale very rarely have snow, owing to its warmer temperatures during the winter. It may only occur about every five to 10 years. The last time it snowed was February 26, 2011. Snow accumulations around 3 in were present; sleet was present, as well. Frost is common from late November to early March. Temperatures as low as 30 °F (−1 °C) do occur during the winter, but only once or twice. Heavy rains and thunderstorms are also common during the winter. The spring brings pleasant weather, with very little rain. The summer is usually fairly warm, with highs from 85 °F (29 °C), to the low 100s (40 °C). The highest temperature ever was 110 °F (43 °C). Summer can sometimes bring monsoon thunderstorms. Humidity can be very low, but it can also be very high, causing very steamy, muggy, and uncomfortable conditions. These days cause heat indices over 120 °F (49 °C). Fall brings nice weather, but can be gusty due to the Santa Ana winds, blowing in once or twice a year from October to December. Santa Ana winds can reach up to 70 miles per hour, with gusts up to 100 in mountain passes and canyons. One to eight thunderstorms occur in Glendale each year. Very rarely are they severe, but when they are, they are accompanied by gusty winds and hail.

The city has nearly 50 public parks, from Deukmejian Wilderness Park in the north to Cerritos Park in the south. Central Park has the only West Coast monument to Korean comfort women of World War II.

In June 2000, Erin Texeira of the Los Angeles Times stated that according to data from the US Census and the City of Glendale, the populations were about 30% Armenians, 25% other White, 25% Latino and Hispanic, and 16% Asian.

See also: History of the Armenian Americans in Los Angeles

Armenian families have lived in the city since the 1920s, but the surge in immigration escalated in the 1970s. Armenian Americans are well integrated into the city, with many businesses, several Armenian schools, and ethnic/cultural organizations serving this ethnic group. Most of the Armenians in Glendale arrived in the city in the past two decades. The city of Glendale is home to one of the largest Armenian communities outside of Armenia.

Beginning in the late 1980s, with assistance from family and friends already there, Armenians from the former Soviet Union began arriving. In the Glendale Unified School District, by 1988, along with students from the Middle East, they had become the largest ethnic group in the public schools, now having a larger number than the Latinos. Glendale became the municipality with the largest number of ethnic Armenians other than Yerevan. Rick Young, a Glendale Police Department spokesperson, stated, "In five to eight years, the [Armenian] community went from a few thousand to about 40,000." Levon Marashlian, an instructor of Armenian history at Glendale College, stated that in the early 1990s Glendale's Armenian community became the largest in the Los Angeles metropolitan area, surpassing the Armenian community of Hollywood. Alice Petrossian, the GUSD director of intercultural education, stated that Burbank lies within the middle of other Armenian communities, so it attracted Armenians.

A new headquarters of the Armenian National Committee/Western Region opened in 1994. By 1999, about 25% of the population spoke Armenian and there were many Armenian businesses. By 2005 the Armenian population was 40% of the total population.

According to the United States 2000 Census, Glendale is home to 65,343 Armenian-Americans (making up 34.1% of the total population), increasing from 1990 when there were 31,402 Armenian-Americans in the city. As of 2005, one-third of Los Angeles' estimated 153,000 Armenians, or 51,000 around a quarter of Glendale's 205,000 residents was Armenian. At that time, Armenians held a majority on the Glendale city council, and it had done so since that year.

As of 2005 Armenian businesses include bakeries, coffee shops, and restaurants.

As of November 2015, three of the five members of Glendale's city council are of Armenian descent: Mayor Ara Najarian and councilmembers Zareh Sinanyan (mayor from April 2014 to April 2015) and Vartan Gharpetian. Former Armenian-American mayors of Glendale include Larry Zarian, Bob Yousefian, and Rafi Manoukian.

Some outspoken members of the highly successful Armenian-American rock band, System Of A Down, were based in Glendale at the time of formation. These include singer Serj Tankian and bassist Shavo Odadjian.

The Mexican American community was established in Glendale by the 1960s. The late 1980s and the early 1990s also saw increases in Mexican American population as Glendale offers a safer suburban environment away from the city with higher quality education. As of 2012[update], Filipino Americans were the third largest minority roup in Glendale, making up seven percent of the city's total population, overtaking Korean Americans. After the Persian Revolution, many Persians migrated into the cities seeking a suburban city with lower crime and quality education.

All content from Kiddle encyclopedia articles (including the article images and facts) can be freely used under Attribution-ShareAlike license, unless stated otherwise. Cite this article:
Glendale, California Facts for Kids. Kiddle Encyclopedia.